Watching Ann-Margret in a remake of a classic western made me think of Bette Davis and Joan Crawford as played by Susan Sarandon and Jessica Lange in Ryan Murphy's FEUD: BETTE AND JOAN.  Not that Ann-Margret was an older Hollywood actress fighting to stay employed in it.  Hardly.  In Hollywood history, folks are still stunned at the number of truly classic films that were released in 1939.  There must have been something special in the 1938 Hollywood studio water that enabled writers and actors to do such remarkable film work that came out the following year.  One of those films of 1939 was STAGECOACH.  It made a star of its young, new actor -- John Wayne.  Assorted characters travel via stagecoach in the wild west. Not everyone is what they appear to be or what society would have us think they are.  Claire Trevor is terrific in the original STAGECOACH as the frontier tart with a heart o' gold.  Wayne's character will be the first man to treat her like a lady. 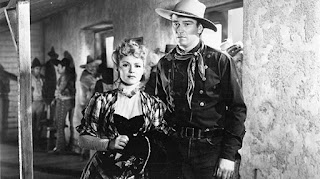 We learn what the real deal is about each character in the journey of the STAGECOACH. 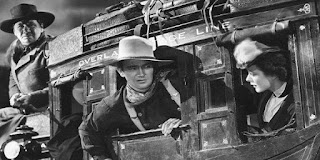 Ann-Margret took on the role originated by Claire Trevor and this was just three years after movie audiences saw Ann-Margret sing and dance in the very wholesome BYE BYE BIRDIE.

She held her own dramatically in this remake opposite male actors who were making movies before she was born.  Bing Crosby, Van Heflin and Robert Cummings are in the cast.  Crosby and Cummings had lead roles in Paramount movies in the 1930s. 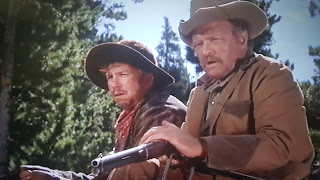 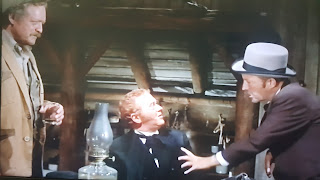 Crosby took on the role of the alcoholic doctor, originally played by Thomas Mitchell.  He's quite good in it.  The singer/actor displays some solid dramatic touches in with the light moments. 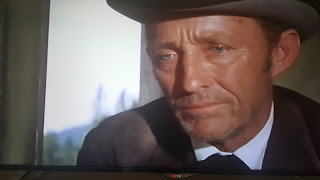 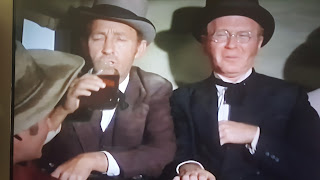 This 1966 STAGECOACH role was his last film part but not the last lead role for him.  He'd be excellent in a 1971 network TV movie as a small town New England doctor with dark, secret motives in DR. COOK'S GARDEN.  This dramatic production would boast one of Bing Crosby's best performances in his entire career. 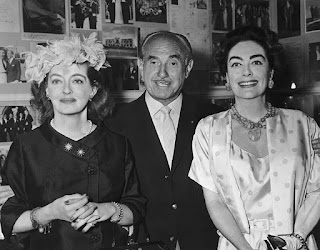 That brings me to Bette Davis and Joan Crawford.  In FEUD, we see the two women -- both of whom were big box office stars in the 1930s and 40s -- pushing themselves to make an independent, low budget psychological horror story work.  And it did. Big time. WHAT EVER HAPPENED TO BABY JANE? was a huge box office hit and brought Davis an Oscar nomination for Best Actress of 1962.  Davis was hungry to win, hoping this nomination would lead to her third Best Actress Oscar victory.  She didn't win.  Crawford didn't even get nominated.  In FEUD, we saw how these two women endure emotional bolts and jolts simply because they're well over 40 and no longer "babes." Hollywood is run by men executives and mature women were not treated well. Davis and Crawford, in their youth, were top moneymakers for their home studios.  Come the 1960s, good movie offers for them had pretty much dried up.  However, the guys over 40 and over 50 were still getting juicy, dignified roles.  Heck, Robert Cummings even had a kissing scene with Ann-Margret in 1966's STAGECOACH. 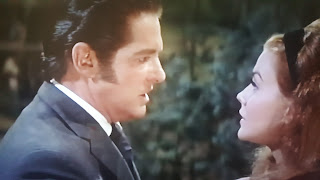 Just like Bette Davis, Robert Cummings was starred in Warner Brothers films in the early 1940s.  In STAGECOACH, he's flirting with women played by Stefanie Powers (seen here) and Ann-Margret. 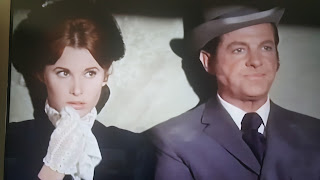 There's some good acting in this movie, mostly from the veterans.  It's a big 20th Century Fox production in color with lots of action and it is entertaining, but it really can't eclipse the overall quality of the 1939 original.

This remake is sort of "4 Degrees of Judy Garland."  Van Heflin was Judy's leading man in PRESENTING LILY MARS (1943).  Bing Crosby sang with Judy in radio appearances in the 1940s end early 50s.  Keenan Wynn appears as a villain.  He worked with Judy Garland at MGM in FOR ME AND MY GAL and Vincente Minnelli's THE CLOCK. 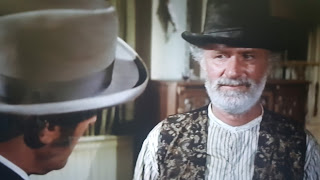 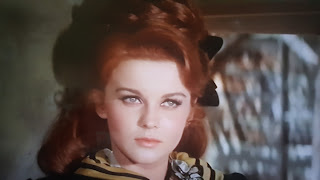 Ann-Margret's hair was done by Sydney Guilaroff who'd long been MGM's master hairstylist.  Sydney Guilaroff was to movie hairstyling was Louis Armstrong was to American jazz.  He did Judy Garland's hair for THE WIZARD OF OZ, EASTER PARADE, THE PIRATE and SUMMER STOCK.  He stayed in demand from the late 1930s up to 1994.  He died in 1997 at age 89. 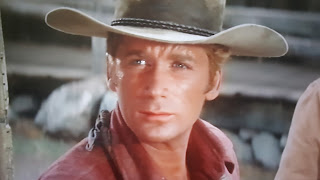 The movie ends with closing credits of portraits painted of each star as his or her character in STAGECOACH.  Get this -- each portrait was painted by the famed artist and illustrator, Norman Rockwell.  Those portraits are wonderful to see.

The Norman Rockwell portrait of Alex Cord as Ringo is more animated than Alex Cord's performance.  Bless his heart.  He was no John Wayne here.  That's one big reason why this remake can't touch the original.

Speaking of John Wayne, Ann-Margret would be his leading lady in his big 1973 western, THE TRAIN ROBBERS.  You read that correctly...1973.

FEUD starring Jessica Lange and Susan Sarandon racked up a record total of 18 Emmy nominations.  Both women are in the category for Best Actress in a Limited Series. 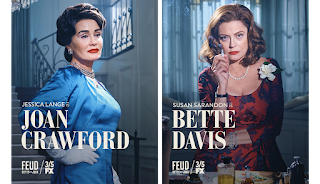