This film should not work. But it does and it's fun.  Two internationally famous men at opposite ends of the popularity scale had a brief meeting in the White House.  President Nixon met with rock superstar, Elvis Presley.  The photo of them shaking hands a few days before Christmas in 1970 became a must-see pic of American pop culture in that decade. An imagining of what occurred during that meeting serves as the basis for ELVIS & NIXON.  Two-time Oscar winner Kevin Spacey stars as President Nixon.  Michael Shannon, seen recently in the sci-fi chase movie MIDNIGHT SPECIAL, is a most unlikely choice to play Elvis.  He looks more like an early David Letterman type than a 1970s Elvis.  But in this new movie, he plays Elvis and he's a winner in the part.  What a totally cool surprise!  Shannon hits a high note with just the right pitch as the rock 'n' roll legend. 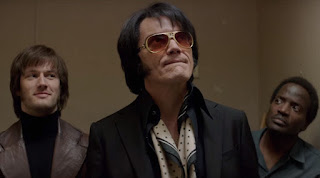 Elvis Presley has been good for a couple of actors.  Kurt Russell was terrific as Elvis in a 1979 TV mini-series biography directed by John Carpenter.  Shelley Winters co-starred as Elvis' mother.  In 1990, critics loved Elvis, the ABC TV series based on the rock star's early years with actor Michael St. Gerard getting fabulous reviews as Presley.  But TV audiences just didn't take to the show and it was pulled about about 10 episodes.  With hair and make-up, both actors did resembles Elvis Presley.  Kurt Russell even sounded like him.  Michael Shannon doesn't resemble Elvis Presley and doesn't try to imitate his throaty speaking voice.  What he does do is bring you into Elvis' heart and sensitivity.  He plays Elvis as a world-famous entertainer with just enough ego to feel that the President of the United States should make time to see him.  He knows he's like catnip to the ladies. 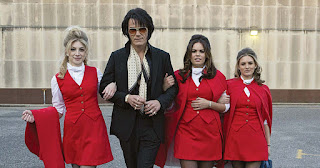 He knows that Elvis the Star is a creation that's made him rich and famous.  It's not Elvis the real person, the man that his closest friends like Jerry Schilling know.  Jerry's the character in the left corner of the elevator photo up top.  He was a member of Elvis' Memphis inner circle.  He serves as a producer for the movie and he's played in the movie by British actor Alex Pettyfer.

Elvis is concerned about the direction of America, an America still involved with the Vietnam War and one having student protests on college campuses.  Elvis, like a movie cowboy, wants to help clean things up. He basically wants President Nixon to deputized him, if you will, and give him a badge.  What I loved most about Shannon's performance is that he gave you a look inside Elvis' broken heart and also played Elvis' extreme loopy rock star behavior as it was completely logical.

President Richard Nixon has been played onscreen previously.  Anthony Hopkins and Frank Langella got Oscar nominations for playing him in drama.  Dan Hedaya played him for laughs in the satire, Dick.  Kevin Spacey plays him for laughs here.  In this film, he's the strict and not exactly photogenic Republican president and not popular with young Americans the way Elvis is.  This Nixon is cranky, jealous, a little confused and ultimately impressed with the star whose presence could make the president seem a bit groovy with the kids. 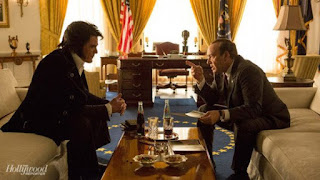 Big praise goes to director Liza Johnson.  She's got the comedy gift.  She kept the tone disciplined and rooted in true human feelings.  Keep in mind these two men live in a couple of the country's most famous homes -- one lives in The White House and the other lives in Graceland U.S.A.  One of my favorite scenes in AMADEUS (Oscar winner, Best Picture of 1984), is when Jeffrey Jones as the clueless Emperor Jones tells the young genius, Wolfgang Amadeus Mozart, that his new composition has "too many notes" adding that there are only so many notes that the ear can hear.  It was the reaction looks on the faces of the emperor's companions listening to his sheer idiocy that broke the audience up with laughter.  Liza Johnson has the same touch Milos Forman displayed in that scene.  She displays it, with a dab of Preston Sturges, in all of ELVIS & NIXON.  Here's a trailer.
I've been a Michael Shannon fan for a few years now.  Especially when I saw his lead role in the indie drama, BUG, in 2006.  His is a face that seems to have been molded specifically for drama.  If you saw his Best Supporting Actor Oscar-nominated performance in 2008's REVOLUTIONARY ROAD and if you watched him as the 1920s Prohibition era federal agent on the HBO series BOARDWALK EMPIRE, you know what I mean.  In his meaty supporting and lead roles, rarely has delivered scenes with a comedy tone that made us laugh.  Michael Shannon made me laugh in ELVIS & NIXON.  He's quite good.  So is Spacey, an actor who's had way more comedy assignments onscreen that Shannon has.   The movie is really just about that odd meeting, one that disrupts the White House schedule.  There's a B-story about Jerry Schilling's love life and how it might suffer because he constantly has to be Elvis' wrangler.  It's an underwritten part of the script but it's so minor that it doesn't get in that way of the odd couple situation played by Shannon and Spacey. 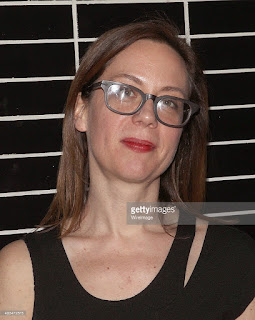 I hope Hollywood takes notice of director Liza Johnson.  ELVIS & NIXON could've come off like an extended Saturday Night Live sketch that grew tiresome after 60 minutes.  But it didn't.  She gave us a breezy, entertaining, funny movie and a new look at the rich talents of Michael Shannon. 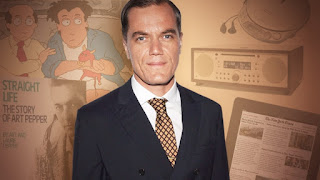