It's a sunny but disappointingly cold Tuesday in New York.  It's disappointing because there are gusty wind chills in the current weather reports and this is opening day for the Yankees.  There's just something wrong about having to wear a parka while you're at the ballpark for a spring game.  I'm indoors and I listened to today's FRESH AIR hosted by Terry Gross on NPR (National Public Radio). In the last 10 minutes of the hour-long show, after the book review segment, there was a truly sweet send-off for a longtime staffer named Dorothy.  Dorothy is retiring.  Terry mentioned that one of Dorothy's many qualities was that she had no patience for anything "pretentious."  Another was that Dorothy had an audio clip from the 1987 satire HOLLYWOOD SHUFFLE, a very funny and low-budget indie feature from actor, director and writer Robert Townsend.  He's pure gold as the aspiring black actor determined to get a break and break through color barriers in Hollywood. 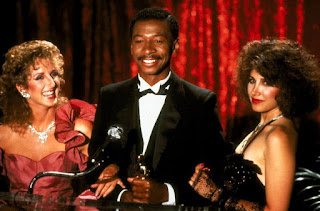 Terry Gross played the clip of articulate and educated black actors submitted to audition for stereotypical ethnic roles.  In this current age of "Oscars So White" and racial diversity issues in the film business, Hollywood Shuffle deserves a second look and some major re-appreciation. 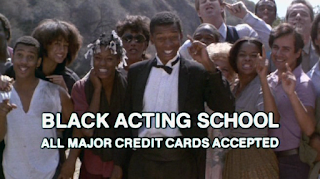 Terry apparently has loved hearing that audio clip for many years around the production office. Here's a trailer for 1987's Hollywood Shuffle.
I interviewed filmmaker Robert Townsend on VH1 when he was promoting that comedy.  If you know my career and my blog posts, you know that I'm proud to have been the first black talent to get his own weeknight prime time talk celebrity talk show on VH1.  I was host and writer.  Some of my guests were Kirk Douglas, Norman Mailer, Dominick Dunne, Anne Rice, Paul McCartney, Carlos Santana, The Smothers Brothers, Marlo Thomas, Alan Rickman, John Cleese, Michael Caine, Meryl Streep, Sally Field, Shirley MacLaine, Liza Minnelli, Gregory Hines, Whoopi Goldberg, Spike Lee, James L. Brooks, Patrick Swayze, Hume Cronyn and Jessica Tandy, Dolly Parton and Fay Wray, star of the original 1933 King Kong.

I didn't have an agent before I got that national show and I didn't have one during its run.  I got an agent after my 3-year contract with VH1 was completed in 1990.  My first agent was with the New York City office of a top East Coast/West Coast agency.  Even though my talk show host work got me excellent reviews and coverage in The New York Times, People magazine and TV Guide, my agent submitted me to audition to play a low-level black crook in the sequel to Weekend at Bernie's.  Rather than explain the role, I'll show you a clip.  I was submitted to play the shorter of the two crooks -- the one in the red jacket rolling dice and trying to perform voodoo on Bernie's corpse in the men's room of a Times Square porno theater.
The casting call specifically sought two black actors for those two roles.  The script I got the audition had the two characters trying to perform that voodoo with a bucket o' fried chicken on the side.  Seriously.

My 1990 occupational life imitated art -- the art of Robert Townsend's 1987 film, Hollywood Shuffle.  Just like the funny audition sequence in the movie, that one from which Dorothy pulled the audio clip, my audition was for a Caucasian trio.  I've had great luck in my career.  One such great piece of luck was that I did not get that part in Weekend at Bernie's 2.

Here's another short clip from Hollywood Shuffle.  It's now out on Blu-ray thanks to Olive Films.  You can find it on OliveFilms.com.


To hear the Terry Gross Fresh Air broadcast from today, April 5th, look for *Programs* at the bottom of the home page, click on to it and look for "Fresh Air" after to go to NPR.org.