Tall, lean Rodrigo Santoro plays a very important character in THE 33, the new movie based on the miraculous global news story from 2010.  In Chile, 33 miners were trapped way below ground after disaster struck in the mine.  Santoro plays Laurence, the well-dressed government employee who must deal with angry family members and other loved ones who know their poor men worked in unsafe conditions. THE 33 was directed by Patricia Riggen.

In a way, his character is the heart of the movie.  He shows what can be accomplished when one is brave enough to be unselfish and do the right thing for someone else.  At first, he is above the miners physically and occupationally.  He must spiritually connect to the unfortunate men underground. Santoro is a talented actor who can disappear into a character.  He's been acting for quite a while. He's in the very popular Christmastime movie, 2003's LOVE ACTUALLY.  He really took focus here in America with his work as the evil King Xerxes in a big box office hit, the ancient history war movie called 300.

If you didn't know his name, you wouldn't know this is the same actor who played the fierce Persian nemesis to the heroic Greek warriors in 300...

...and also played the sweet guy in Florida who was the first boyfriend to the divorced dad and newly-out ex-cop that Jim Carrey played in I LOVE YOU, PHILLIP MORRIS. 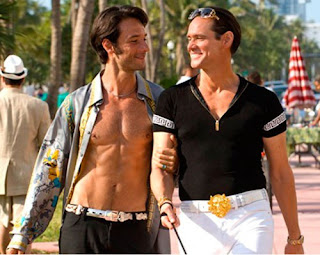 Rodrigo Santoro's Laurence undergoes changes throughout the course of the rescue drama in THE 33.  As he steps out of his corporate identity and contributes to the efforts to bring the miners up, he brings up the best within himself. 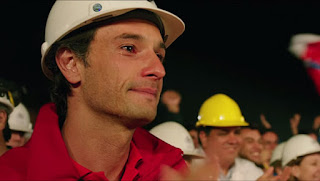 Santoro has played the wicked King Xerxes in two 300 features.  He'll be seen playing the the ultimate good guy in a new adaptation of an Oscar winning Hollywood classic from the 1950s.  Rodrigo Santoro and I talk about that role after we talk about his excellence in THE 33.  Here's my interview conducted for We Got This Covered.  Just click onto this link: