We all watched a miracle on live TV.  Antonio Banderas stars in THE 33, a new movie based on a real life news story that gripped the attention of people all over the world.  33 men were trapped far underground in a mine in Chile.  Those miners were down there for 69 days and, one by one, they were rescued.  I watched that miraculous rescue live on CNN.  Riveted, I could not leave my television and, I admit, the happy ending to this life-threatening disaster news story put tears in my eyes back in 2010 when it happened. 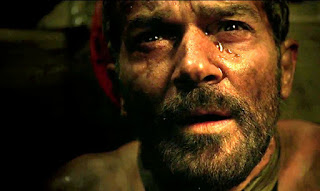 The bearded Antonio Banderas plays Mario Sepulveda, a man who loves his life and his family.  Family is all this man of meager income has.  His job proves to be dangerous and he works without government safety precautions because, like his fellow miners, he needs the money and he has no power to improve working conditions. 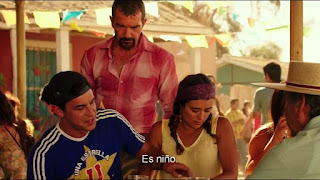 Underground, when disaster strikes, he becomes the group leader and the man in charge of the minimal food the miners have.  Mario has a big personality and a big belief that they will survive against all odds.  He is the message that we must keep hope alive. 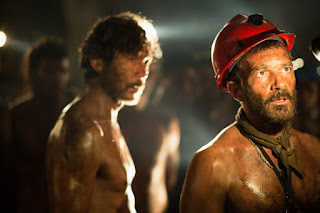 The 33 was directed by Patricia Riggen, a Latina filmmaker.  She's originally from Mexico and learned her filmmaking craft at Columbia University in New York City. 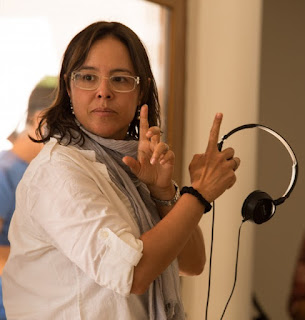 If such an action-packed tale of men in crisis had been picked up by top Hollywood studios in the past, the job of director would have automatically gone to a white male.  Before we hear from the star of the film, let's see a trailer for The 33.
Antonio Banderas plays a real-life character whom he could meet for inspiration before shooting the film. Mario was tempted by all sorts of big money offers to tell his story.  That caused conflict that we see erupt underground in the movie.  For We Got This Covered, I asked Banderas about meeting Mario.  I also asked him about the experience of working with Patricia Riggen -- not the first female director who has guided him through a film.
The 33 opens Friday, November 13th.  You can get more entertainment news on WeGotThisCovered.com.  By the way...the food fantasy scene with the 33 hungry miners was a sheer delight in this drama.  Bravo to the writers and director for that inspired break from the story's tension.