I'll not be surprised if SPOTLIGHT gets an Oscar nomination for Best Picture.  This is one engrossing journalism drama based on a true story.  Michael Keaton stars.  I've been a Michael Keaton since his movie comedy and short-lived TV sitcom days back in the 1980s.  He was the main reason why I saw Birdman.  In that movie, he was a former movie star who hit a career lull in middle age.  He turns to the Broadway stage to reinvent himself.  In that regard, Birdman was just like the classic Vincente Minnelli musical comedy, 1953's The Band Wagon starring Fred Astaire.  The big difference is that, in the wonderful Minnelli musical, the whole company of the show starts off with production that is in shambles.  By the end, they'd all come together as a unit to turn into a hit and sing "That's Entertainment."  In Birdman, the fellow cast members are in an individual orbit and never come together as a unit we come to love.  But Keaton's character in the drama is successful at reinventing himself.  In Spotlight, his character heads a group of workers who do come together, who do work hard as a unit, and they're all on the same page. 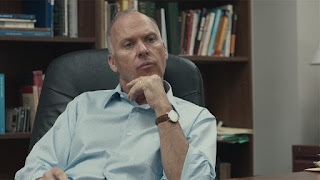 If you couldn't quite connect to the surreality of Birdman, I believe you'll like this straight-forward film a whole lot more with its fine Keaton performance.  Michael Keaton's performance in Spotlight could get him some Golden Globe or Oscar nomination consideration.  Rachel McAdams is an actress I've liked but I always felt she was used mainly as "the babe," if you know what I mean.  She was in Mean Girls, Wedding Crashers, The Family Stone and Woody Allen's Midnight in Paris.  She was a total treat in 2007's Married Life, a movie that tanked at the box office but didn't deserve to. 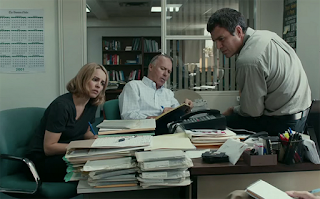 More about that later.  I've never seen Rachel McAdams better than she is as the tireless, determined newspaper reporter for The Boston Globe in Spotlight.  You feel that this woman had definitely worn down some shoe heels and acquired a few blisters doing footwork to meet people, ask questions, get answers, endure rude behavior and otherwise investigate a story.  She's so alive and focused in this unglamorous role. 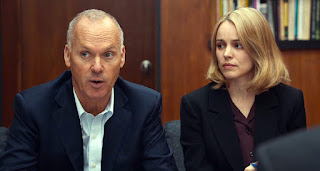 In Boston, a very Catholic city, this small group of print reporters is assigned to investigate a story.  What seemed like a minor assignment from the new boss builds into a David versus Goliath case.  The Goliath is the Catholic Archdiocese.  The Boston Globe broke the local story of sex abuse scandals, molestations of young males committed by priests, that were covered up by the Catholic Church.  It grew into a much bigger story.  A national one.  The title refers to the Boston newspaper's investigative unit.

Spotlight does not open until early November, so I'll save a total review for that time.  But, should you be offered a chance to attend a preview of this movie, definitely go.  I think you'll really dig it.  The excellent cast includes Mark Ruffalo, Liev Schreiber, Billy Crudup and Stanley Tucci. Keaton plays the head of the investigative news team. 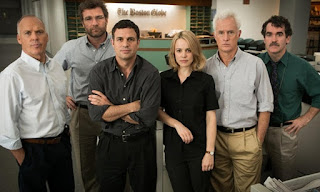 If you liked Alan J. Pakula's 1976 film, All the President's Men, put Spotlight in the same category.  It's a great reminder of what journalists did before social media and 24-hour cable news channels changed journalism after the attacks of September 11th.  These reporters do extensive footwork, drive used cars, spend hours in libraries, talk to people in person, go through files and files of information and put in long hours at work.  Much of it is tedious work.   They couldn't Tweet and reTweet.  They had to go beyond Google and Wikipedia for information.  And you can tell that they did it for the passion and love they had for the profession.  These weren't folks making star salaries.  They were working class professionals with families and attachments to the Catholic Church.

The story of this news team in Spotlight also becomes one of redemption.  I'll save that for when the movie opens.  Spotlight was written and directed by Tom McCarthy.  He gave three other fine films -- The Station Agent starring Peter Dinklage, The Visitor which earned Richard Jenkins a well-deserved Oscar nomination for Best Actor, and the high school wrestling drama, Win Win starring Paul Giamatti and Amy Ryan.

To see an earlier Rachel McAdams performance that I found most entertaining, rent 2007's Married Life.  A true gentleman, middle-aged and married, has fallen in love with a younger woman.  He can't bear the thought of breaking his wife's heart by asking for a divorce, so he plans to kill her.  He believes that would be more genteel.  Married Life is so...so French.  You'll be surprised at how stylish, bright and witty this movie is.  Set in the 1940s, it stars Pierce Brosnan, Patricia Clarkson and Chris Cooper.  Rachel McAdams plays Kay, the younger woman. The movie runs only about 90 minutes and -- as usual -- Patricia Clarkson is fabulous.  Here's a trailer.