That victory was so significant.  Viola Davis is the first black woman to win the Emmy Award for Best  Lead Actress in a Drama Series.  The first.  And Emmys have been around since 1949.  For performers of color who've had to scuffle because the playing field of opportunity has not been a level one, it was a victory for us all.  Brava, Viola! 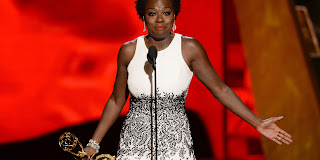 I've written previously that Viola Davis has already made Hollywood history.  She and Oscar winner Whoopi Goldberg are the only two black women who have more than one Oscar nomination to their credits.  That's not a statement on talent.  It's a statement on Hollywood's lack of opportunities for black actresses even after some of those actresses have gotten Oscar nominations or won the award.  Whoopi was a Best Actress nominee for The Color Purple.  She won Best Supporting Actress for Ghost.  I worked with Whoopi for two years.  We talked about that.  Her mailbox was not flooded with script offers after her first Oscar nomination.  With The Color Purple nomination to her credit, she could not get an audition for Ghost.  The producers refused to see her.  Whoopi told me that they saw several other actresses but would not see her. Patrick Swayze was the star of the project.  He told the producers to let Whoopi audition or else he'd pull out of the project.  She auditioned, she got the part, Ghost was a big box office hit, and she won an Oscar

Viola Davis was a Best Supporting Actress Oscar nominee for playing the conflicted mother of a Catholic school elementary student in Doubt.  She was a Best Actress nominee for playing a 1960s Southern maid in The Help.  Like Whoopi Goldberg and like three stars of TV's Empire -- Taraji P. Henson, Gabourey Sidibe and Oscar winner Jennifer Hudson -- Viola Davis turned to television because Hollywood had no good scripts for her.  She took a TV role not written specifically for a black woman.  The role was Annalise on ABC's HOW TO GET AWAY WITH MURDER.  Annalise is a brilliant professor of law.  She's also a married woman with a complicated, messy personal life that makes for juicy TV.  Annalise has a life that involves a murder. 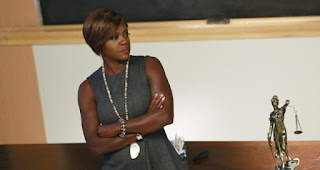 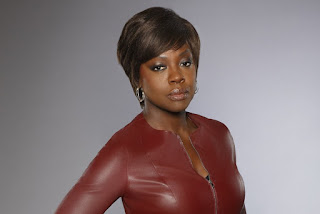 How To Get Away With Murder became an instant hit series.  And then this happened on Sunday night, September 20th.  Listen to the acceptance speech.
Viola Davis thanked writer/producer/powerhouse Shonda Rhimes and producer Peter Nowalk for having the imagination to embrace diversity and consider her.  That embrace led to Emmy Awards history being made. 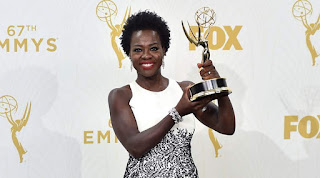 I worked with Whoopi Goldberg on a national weekday morning radio show.  I reviewed movies every Friday.  One movie I saw was the September 11th drama, World Trade Center, a 2006 film from Oliver Stone.  Nicolas Cage, Maggie Gyllenhaal and Mario Bello were the stars.  But there was an actress who had a bit part as a mother in a hospital whose brief performance went through me like sweet electricity.  She was, to me, the heart of that movie. Her performance was a statement on what we should all keep in mind about those we love. I stayed through the closing credits to see her name.  "Mother in Hospital" was played by...Viola Davis.  And then came Doubt followed by The Help on the big screen.

Not that it needs to me remade.  Who could top the original starring Bette Davis?  But...could you imagine a new All About Eve with Viola Davis as Broadway legend Margo Channing and Oscar winer Lupita Nyong'o as Eve Harrington?  And if Meryl Streep had not been available to do The Devil Wears Prada, Viola Davis would've been fabulous with a capital F as fear-inducing fashion magazine editor Miranda Priestly.

I do believe that, in time, Broadway Tony winner and TV Emmy winner Viola Davis will make Hollywood history again as the first black woman to have three Oscar nominations to her credit.  A new season of How To Get Away With Murder starts Thursday night, Sept. 24th, on ABC.