MAGIC MIKE XXL, A Little Behind

MAGIC MIKE got great word of mouth during its 2012 theatrical run.  I saw it because several friends of mine raved about how entertaining it was.  I haven't heard folks talk like that about the sequel.  I saw MAGIC MIKE XXL, the follow-up starring Channing Tatum, Joe Manganiello and Matthew Bomer.  Very likable actors and yummy eye candy strutting their stuff in a surprisingly tame stripper tale.  Except for men's dialogue riddled with F-bombs, this is a pretty PG movie with R language.

The script shows you that the troupe is cool with a gay vibe.  It stops at Mad Mary's, a Florida club with a solo dance contest hosted by a drag queen.  Mike and the guys good-naturedly go onstage, vie for the cash prizes and give you some Madonna "Vogue" music video realness.  In some flirty first-meet dialogue with a young lady early in the film, she claims to be a drag queen -- on the inside.  When Mike  (Channing Tatum) asks what her drag name is, she replies "Dolly Titz."  He says that his is "Clitoria Labia."  Later, at clubs packed with women wanting male stripper entertainment, the accent is on each woman being reminded that she is a queen and beautiful.  Cool with gay culture, respectful of women.  Two nice elements about Magic Mike XXL.

We saw only ONE naked male butt in Magic Mike XXL.  We see it briefly in the first five minutes.  We saw more man-ass in The Full Monty, Steel Magnolias and episodes of True Blood during its run on HBO.

When you have a same-sex group on the same mission, you watch for the bonding and bickering.  This goes for a World War II drama like 1949's Battleground to 2011's Bridesmaids.  The guys traveling in a food truck in Magic Mike XXL are friends on a showbiz mission, and boy can they bicker.  But the bickering needed better writing.  If I wanted to hear constant "What the f**k, dude?," "Motherf***er!," and "F**k it!," I can just walk down the avenue, go to a mall or stand on a subway platform and wait for a train.  Tatum and Manganiello can handle comedy quite well.  Manganiello, who certainly carbonated lots of hormones when he played the sexy werewolf on True Blood, gets laughs as the overly-macho and well-hung Armenian who's occasionally clueless.  Bomer kept up with them in the comedy performance department.  Instead of pedestrian dialogue that goes on too long, these actors playing frustrated performers seeking gigs should've been given peppery dialogue like those wisecracking unemployed actresses in Stage Door had. That 1937 comedy/drama starred Ginger Rogers, Katharine Hepburn, Lucille Ball, Ann Miller and Eve Arden.  Rent it and you'll see what I mean.

If you saw the Magic Mike XXL trailer, Manganiello has a scene in a convenience store where he puts his stripper moves to use on a Pepsi cooler.  Magic  Mike XXL needed more of that zest.  It's a highlight of the movie.  Sexy and funny. 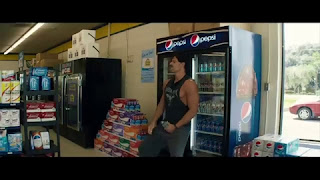 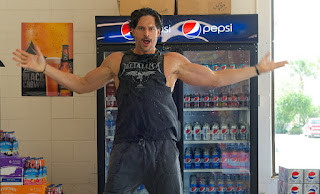 He sees that the business has changed.  They're doing Old School 80s stuff.  The new dudes are killing it in routines based on Twilight movies.  Or, as he calls it, "vampire shit." 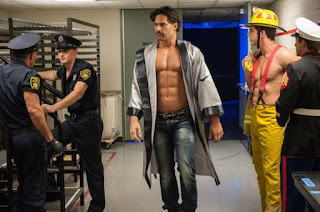 Michael Strahan from daytime TV's LIVE! with Kelly and Michael has one scene as a stripper at an exclusive club.  He could've been utilized so much more.  He looks excellent stripped.  He's pretty much giving a private dance to a woman who looks like one of the Weather Girls while her friends hoot and holler and carry on.  That's all he does.  Just that sexy strip and dance.  Michael Strahan is packed with personality, charisma, charm and he has a knack for comedy.  Those qualities weren't tapped in the least for this movie -- and they should've been.  He was just eye-candy in a pair of gold shorts. 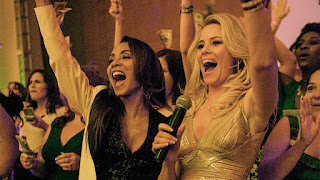 Jada Pinkett Smith, Elizabeth Banks and Andie McDowell do good work playing smart women who know what they want, women who'd make good dependable friends.  Blonde Banks, an exciting actress/director skilled at both comedy and drama, appears nearly 90 minutes into the story for a short role.  She should've been used throughout more of the film.  This year, she's terrific in the biopic Love & Mercy, about the emotionally abused Brian Wilson of The Beach Boys.  Banks directed the hit comedy sequel, Pitch Perfect 2  The scenes with McDowell in a big gracious Southern home on a girls' only night are fun.  The stripper dudes, led by Manganiello's character, get the women to talk about what they want, what they really really want from a man.  Manganiello's character likes real communication and hates when his buddies bury their faces in cellphones and check for messages.  "Be present," he scolds.  Still, the overall problem with the script that it gets you heated up for a big sexy beefcake dish that it never quite delivers.  One shot of a bare behind in the first five minutes.  That's it.

Magic Mike XXL.  Hot, talented actors try to take if off with a lukewarm sequel script.