BOSOM BUDDIES. BIG. SPLASH. SLEEPLESS IN SEATTLE. PHILADELPHIA. FORREST GUMP. THE GREEN MILE.  CAST AWAY.  I have been a devoted Tom Hanks for a long, long time starting way back when I was just starting my professional TV career.  He made me laugh every single week he was in drag on ABC's 1980-82 sitcom Bosom Buddies.  I worked on Milwaukee's ABC affiliate, doing entertainment reports.  Our little ragtag crew at work loved getting to the office in the morning and quoting lines from the previous night's Bosom Buddies episode.  As my career progressed, some of its happiest days were those in which I spent time with Tom Hanks in person.  Not only is he a true gentleman, he gave me a sense of validation.   Tom Hanks watched me on TV more and knew more about my TV career than my last two broadcast agents did.  And they were taking 10% of my paychecks.  To the actor born on July 9th, I say most sincerely -- and gratefully -- "Happy Birthday, Tom Hanks." 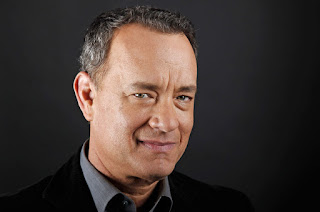 I've had one romantic relationship in my life.  It stated in the fall of 1992.  In 1993, Richard and I thoroughly enjoyed the preview of a new Tom Hanks romantic comedy, Sleepless in Seattle.  In 1994,  we were so proud to see him win the Best Actor Oscar for Philadelphia.  When Philadelphia opened in 1993, Richard was person with full-blown AIDS.  Needless to say, the movie connected to both of us.  I hope to write more about this for a book one day, but let me condense it for you here.  There was a promotional movie junket being held in L.A. for his upcoming movie for the summer of '94.  I worked on a local weekend NBC New York morning news show and I'd been invited to participate in the junket.  I was slated to interview Hanks, other cast members and the director. 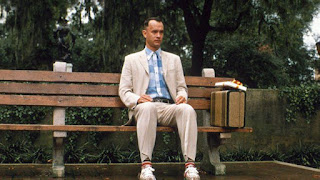 Looking back, the day of my interview at the Four  Seasons Hotel in Beverly Hills now seems so surreal.  There was my interview with one of the biggest,  most beloved stars in movies.  Late that afternoon in the hotel's hospitality suite, entertainment reporters who'd also flown in for the Forrest Gump junket gathered in awe at a TV set to watch two presentations on TV at the same time.  On a small box to the lower right hand side of the screen was the live NBA play-offs game.  The rest of the screen was taken with O.J. Simpson fleeing in a white Bronco on a freeway with L.A.P.D. cars in hot pursuit.

Then there was the phone call I got one hour before my Hanks interview.  The call was from Richard's doctor at Mount Sinai Hospital in New York City.  I had to get him to the hospital a few days before I flew out.  I stayed with him.  His excellent doctor was pretty sure he just needed some observation for a while and he would be ready for me to take him home when I returned from my short business trip.  She called that morning, concerned that he was not responding to treatment.  "Don't panic," she said, "but I think you should call his parents."  When I hung up, the weight of what she'd said hit me so hard that Richard was my immediate and sole focus.  I had to be honest with the film publicity people, tell them that I could not interview Tom Hanks and that I needed to catch the next flight back to New York.  I'd have to call Richard's mother.  I gathered my thoughts, prayed for strength and guidance, prayed for Richard and then the phone rang again.  Richard's doctor called me back.  She'd talked to Richard and told him what she'd told me.  She called again to say "Richard is adamant.  He does not want you to fly back without having done your work."  She said that she felt positively in her soul that nothing critical would happen before my return.  Richard wanted me to do the Tom Hanks interview.

Richard entered and changed my life at a time when there was still great discrimination against gays.  The AIDS crisis still made headlines in the early 1990s.  Gay celebrities did not "come out" for fear of losing employment.  A few co-workers in the newsroom confidentially urged me not to tell the local management at that time that I had a partner disabled by AIDS.  A couple of top male execs in upper management were neither well-liked nor were they trusted (they're long, long gone from WNBC).  My co-workers stressed that I was part-time and not under contract.  My salary helped me take care of my partner.  But, if I came out, management might find a way of not needing my services anymore regardless of how popular I was on the show.  When the news director refused to air my taped interview of Harvey Fierstein, co-starring in Mrs. Doubtfire, because -- in his words -- "I have a problem with him being openly gay," I knew that management team definitely had a problem with diversity.  For most of the time I was making viewers laugh on that live weekend program, I was caring for a terminally ill partner off-camera.  Occupationally, I felt like someone had put a hand over my mouth when I wanted to scream for help.  But I got wonderful emotional support from his family down South.

My heart was understandably heavy when I walked into the room to interview Tom Hanks.  But he lightened it up quickly by proclaiming "It's Bobby Rivers!  The Godfather of Cable TV!"  He'd been a fan of my VH1 talk show host work in the late 80s.

In my Hanks interview, I wanted to honor Richard with a question about discrimination against gays.  I posed the question in relation to Hanks' Oscar-winning career.  The question is in this old reel on mine:
Richard loved the question.  Hanks went on to to say that he would not have been surprised had Hollywood never again cast him as the guy opposite Meg Ryan in a romantic comedy.  But...he was cast.  They reunited for You've Got Mail.  And other actors, such as Philip Seymour Hoffman (Capote 2005) and Sean Penn (Milk 2008),  followed Hanks and won Oscars for playing gay men.  As for his beard in the other footage, he surprised me on the red carpet for the Manhattan premiere of The Green Mile.  He was wrapping up Cast Away at the time.  I was host of a local cable show, one that I loved, called Metro Movies.  Our crew looked like a garage band that had just gotten out of a van.  We knew that stars would be on the red carpet and we hoped to get short Christmas greetings from some of them to use at the end of our holiday show.  I was holding the boom mic.  Tom Hanks got on the red carpet, recognized me and came over.  I am still stunned at that moment.  The crew and I almost openly wept with joy -- like teen girls getting photos with the hottest boy band in the country.  We did not expect to have a close encounter with Tom Hanks.

He won the New York Film Critics Circle Award for Cast Away.  He was voted Best Actor of 2000.  A voting film critic friend of mine asked me to be her date at the awards dinner.  Hanks was there and, after the ceremony, recognized me again and came over to greet me.  At the time, I was seen as guest host on Channel 13, New York City's PBS station.  I hosted the premiere of Ken Burns' Jazz.  Tom Hanks complimented me on that work and said, "Rita and I watched you in the hotel room."  He said this in front of a table of movie critics.  It made The New York Post.

In 2008, when I was seen in Monday through Friday late morning repeats as host of Top 5 on Food Network and heard in the early mornings as a full time regular on Whoopi Goldberg's national weekday show for  Premiere Radio, I met three veteran agents in New York City.  I wanted TV  representation.  All three were with major agencies.  Two turned me down saying that they wouldn't know what to do with me.  The third opened our meeting by asking, "Have you ever done any on-camera work"?

This is why I love Tom Hanks.  He made me feel that I mattered.  Richard died in June 1994.  Just like Hanks character in the first 20 minutes of Sleepless in Seattle, I had so much rage inside because this person I loved so much was gone.  I'd grown into Hanks' character when I rented the movie a couple of years later.  If I'm lucky, one day I'll see him again and I can tell him how his performances have gotten me through some heartache.

His new political thriller opens this fall.  He's so good at what he does.  Can you get me into that Bridge of Spies movie junket?  Please!  I hope Tom Hanks has a terrific birthday.