Actress Ruby Dee died.  She meant so much to me and to her acting community.  Ms. Dee received a lifetime achievement award from the Screen Actors Guild. 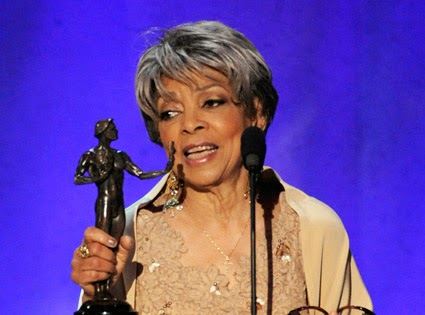 I grew up in South Central Los Angeles, a child of the 1960s.  My parents taught me the significance of  Ruby Dee and her husband, actor/playwright Ossie Davis, when I was a youngster.  I saw her in movies on TV.  I saw her with Ossie with Dr. King when our family watched the historic March on Washington when it was a live network news special telecast.  Ruby Dee was the wife in the original cast of Lorraine Hansberry's groundbreaking Broadway play, A Raisin in the Sun, co-starring Sidney Poitier.  The original cast members -- Claudia McNeil, Diana Sands and Lou Gossett, Jr. -- recreated their roles in the 1961 film version. 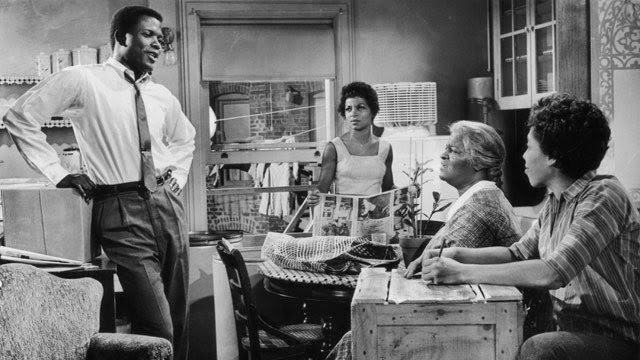 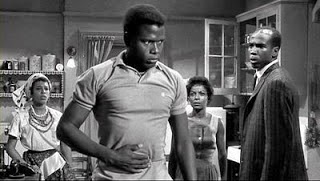 The revival, starring Denzel Washington, was a winner at the Tony Awards last Sunday.  Ruby Dee's one and only Oscar nomination came for her work in 2007's American Gangster starring Denzel Washington.  I've written previously about the lack of good Hollywood script opportunities for black actresses.  I pointed out that, except for two women, all other black actresses have received only one Oscar nomination.  That includes and goes back to Hattie McDaniel who broke a color barrier for her nomination and victory as Best Supporting Actress of 1939.  She was never nominated again.  Dorothy Dandridge, Ethel Waters, Juanita Moore, Diahann Carroll, Cicely Tyson, Alfre Woodard, Diana Ross,  Best Actress Oscar winner Halle Berry, Angela Bassett and Beah Richards are among the black actresses who got only one Oscar nomination in their film careers compared to the young and talented Amy Adams who already has five.  And Adams' first nomination came for a 2005 film.  (Whoopi Goldberg and Viola Davis have two nominations each.)

Ruby Dee got only one Oscar nomination.  She certainly wasn't lacking in talent and versatility.  I bet the Broadway star was lacking in good Hollywood script offers.  TV utilized her gifts.  She took home an Emmy for one of her six primetime Emmy acting nominations.  She and Ossie received Kennedy Center Honors in 2004. 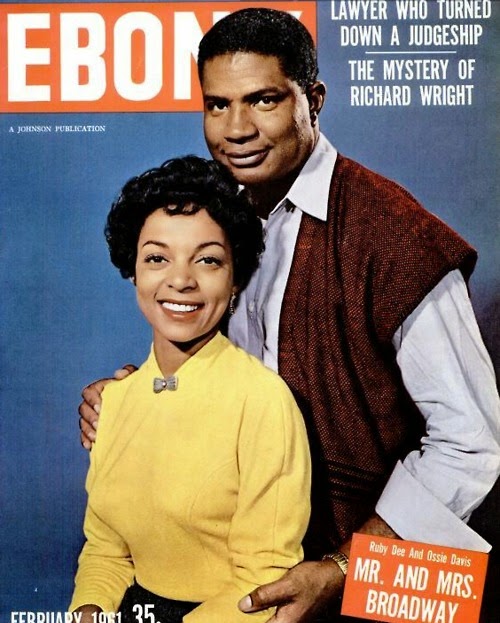 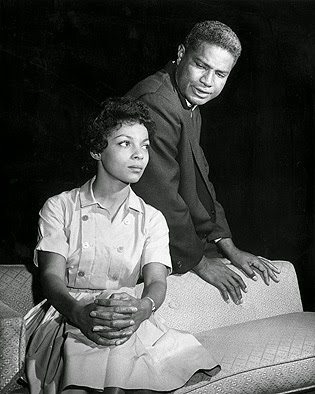 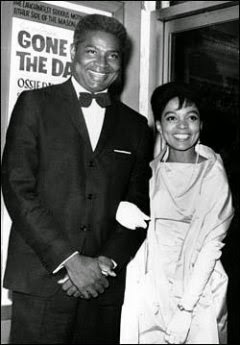 When I watched Ruby Dee in a movie on TV when I was a kid, what jumped out at me was how much I could relate to her.  She was a modern, working class black woman like my mother.  She dressed like my mother.  She was intelligent and strong.  I saw myself and my home life in her stories.  She, Sidney Poitier and Ossie Davis played relatives and people I connected to when I saw 1950's No Way Out on TV.  Poitier starred as the young doctor whose wounded hospital patient happens to be a racist criminal.  Then came Ruby and Sidney in the 1961 adaptation of A Raisin in the Sun.  I'm sure a lot of younger filmgoers know Ruby and Ossie from Spike Lee's internationally popular and critically hailed 1989 drama, Do the Right Thing in 1989. 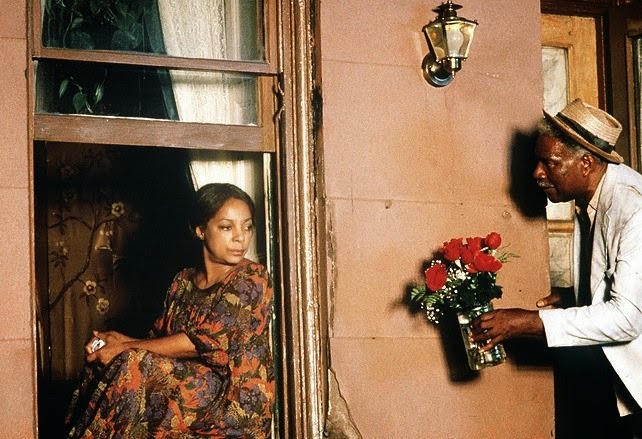 I had a brief, golden moment with Ruby Dee.  Near the end of my VH1 years in the late 1980s, I was on assignment in Los Angeles for some TV taping.  One weekday morning, I was leaving a West Hollywood hotel headed for my taping.  I saw Ruby Dee approaching the entrance and I gasped.  I smiled and greeted her, politely and respectfully keeping my distance.  Ruby Dee warmly approached me and took my hands in hers, saying "I've seen you TV."  She complimented me.

I do not know how much of an impact my TV career has had.  I do wonder and I often get frustrated.  I was extremely proud of my VH1 talk show.  I still am.  Black people did not usually get opportunities to host a show like mine -- one that had A-list guests like Dick Cavett had.  I hoped my work would be noticed, I hoped it would help open a door for more racial diversity in that field of broadcasting and I hoped it would lead to other TV interview show host opportunities for me.  As much as I've sought one, I've yet to be offered another talk show host opportunity like the one I had  during my VH1 years from 1987 to 1990.  As for my work being noticed by industry folks...well, I'll put it like this.  Dick Cavett can still post interview clips from his 1970s show in the New York Times online edition and write about them.  And he gets praise for that work.  I showed montages and clips from my late 1980s national talk show to broadcast agents and the response was "that's old stuff."  Me interviewing Norman Mailer, Kirk Douglas, Paul McCartney and Meryl Streep didn't impress them.  Nor did it seem to impress local TV news executives.

But, that morning, the great Ruby Dee made me feel so significant.  Her warmth and attention put tears in my eyes.  I couldn't wait to call my mother later and tell her about it.

Ruby Dee's contributions as a civil rights activist seemed to me more important to me than they were to my local news producer in the early '90s when I worked on WNBC's weekend morning news program.  I had the opportunity to interview Ruby Dee and Ossie Davis about a project they were doing.  Their publicist said that they could come to the studio for a live interview.  My boss said, "They're not our audience."  I reminded her that, aside from their acclaimed Broadway and film work, they knew Dr. King and spoke at the March on Washington. 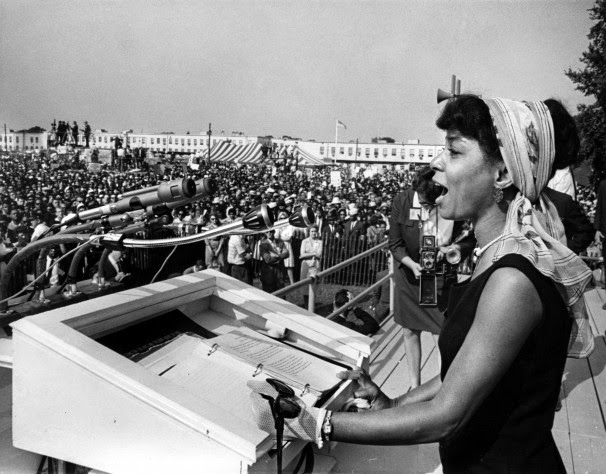 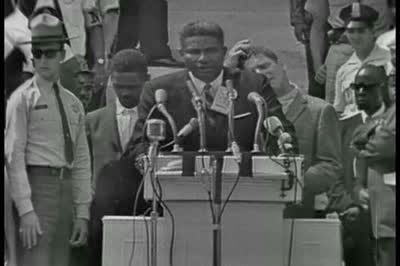 Nevertheless, I was still told "They're not our audience."  By the way, later I was also offered the opportunities to interview singer Dianne Reeves and actress Pam Grier live in the studio.  I was again told that they were "not our audience."  Meaning that they weren't stars our viewers would be interested in watching.  You can imagine how I felt when the male co-anchor wanted to interview Pia Zadora and she was immediately booked.  That's why I'm so passionate about diversity issues and equal opportunities.  I take them seriously.

In the early 1960s, Ruby Dee and Ossie Davis starred in a satirical Broadway comedy called Purlie Victorious.  Ossie played Purlie, a 1960s preacher who wants freedom for all black folks down South, and he wrote the play.  Here's a photo of the original cast being visited by Dr. Martin Luther King. 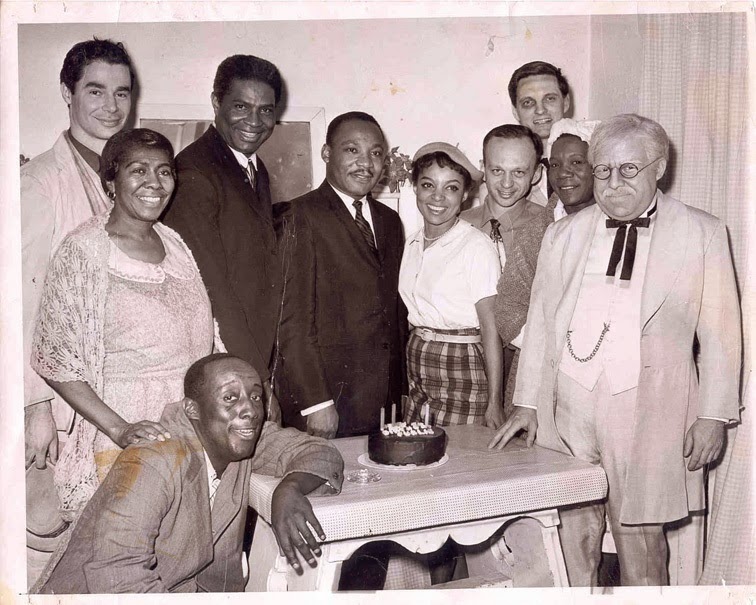 There's Godfrey Cambridge kneeling down front.  There's tall Ossie Davis, next to him is Dr. King and next to Dr. King is Ruby Dee.  The tall white actor in the back to the right is Alan Alda and the lady with the white kerchief on her head is Beah Richards, future Best Supporting Actress nominee for Guess Who's Coming To Dinner?  They all recreated their roles in the independent film adaptation, a movie that blessedly shows us Ruby Dee's delicious comedy skills.  She is wonderful in it.  Ossie Davis co-wrote the book when his Purlie Victorious was turned into the hit Broadway musical, Purlie, starring Cleavon Little and Melba Moore in the comedy roles he and Ruby originated. 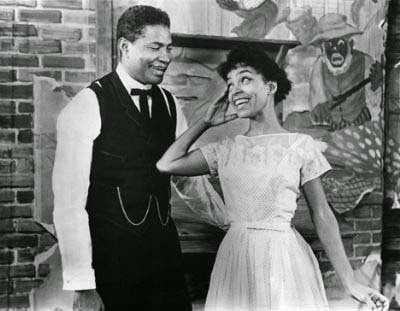 WNBC local news is different now.  Diversity has been embraced in this new century.  That's good to see.

Here's a movie rental recommendation for you:  Sidney Poitier and Harry Belafonte starred in a 1972 western that Poitier directed.  It's called Buck and the Preacher.  You really need to see the supporting role Ruby Dee does in this good movie.

A wagon master and a con-man preacher are helping freed slaves get to safety.  Ms. Dee played Buck's wife.  Ruth just wants to head for Canada, where black folks can be free.  She has a monologue about "poison in the soil" that moved me when I saw the film again last year.  Buck and the Preacher aired on TCM.  You know that Ruth is talking about the blood of slaves and bodies of dead slaves in the American ground.  That's the "poison" that keeps things from growing.  Ruby Dee is magnificent in that scene.  Such power.  She lifts that dialogue and scene to a higher place.

She leaves a golden legacy of acting and civil rights activism behind for us.  New Yorkers know how accessible and generous she was with her time.  She worked steadily, keeping her skills sharp.  I am positive the lights of Broadway will be dimmed in her honor.  To me, she and Ossie were a legendary couple. 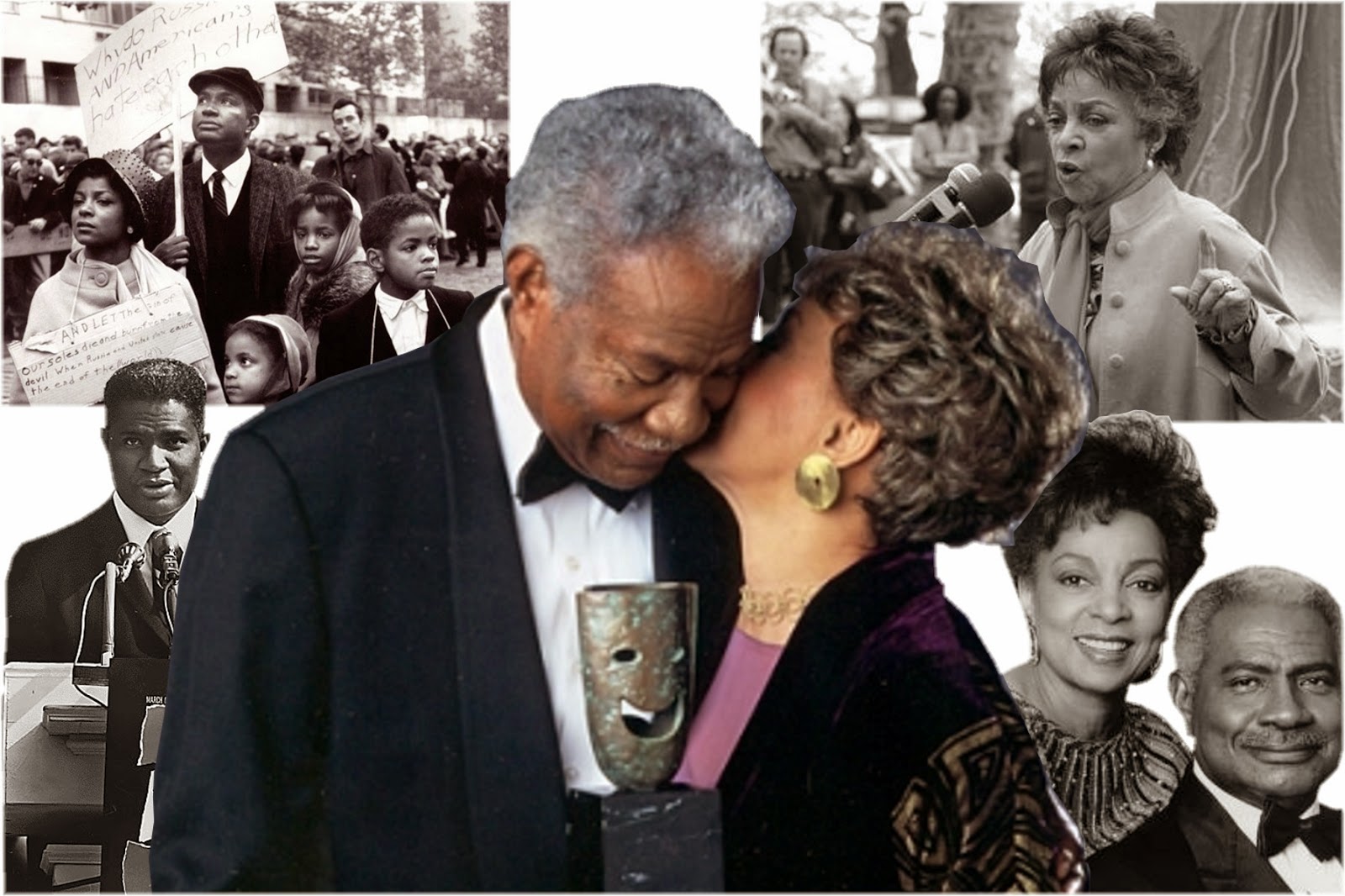 Thank you, Ruby Dee.  You made us feel so significant.