A couple of years ago, I discovered and became a major fan of Airtalk, the weekday show on KPCC listener supported talk radio out of Pasadena, California.  I listen to it on my computer.  Its host, Larry Mantle, is outstanding.  Listening to him is practically a master class in how to be a good host.  He listens, he asks excellent questions, he's informed, he's warm and he keeps a working class sensibility about the topics, no matter how lofty they may be.  That gives the show a golden appeal.  He doesn't talk down to people and he doesn't presume that topics may be too high up for the average person to grasp.  That was a quality I loved about Roger Ebert's film journalism.

My favorite Airtalk day is Friday.  Every Friday starting at noon, we get one hour of "Filmweek."  Guest critics come on and review films -- big Hollywood releases, small indie films, documentaries, foreign films -- the whole range.  And it's a snark free hour.  The critics take their work and the film discussion seriously.  But it's not so serious that it's not entertaining.  Also, Larry Mantle -- unlike network morning news programs when they had regular film critics -- promotes racial and sexual diversity.  We hear black critics and we hear women of all colors reviewing movies.

Last Friday's critics on KPCC's "Filmweek" hour of Airtalk were Henry Sheehan and Wade Major.  They were so enthusiastic, so passionate in their support of a new drama that is now out in limited release that it was one of the most memorable radio segments I'd heard all last week on any radio station.  One of them said something so wise that it made me go, "Wow."  The new movie stars Clive Owen. 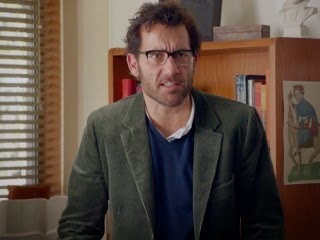 His co-star, playing a physically disabled teacher, is Juliette Binoche. 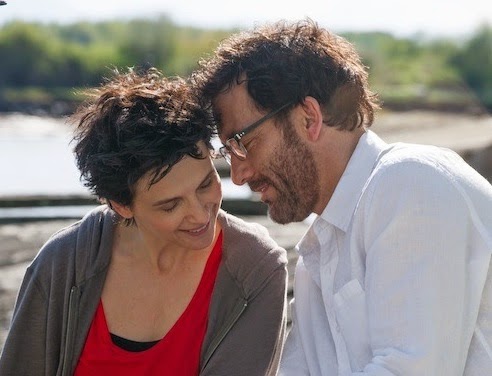 Here's the trailer for Words and Pictures.  Check to see if it's playing near you.

Sheehan and Major said that some of their esteemed colleagues were lukewarm to Words and Pictures in their reviews.  It was then that their segment went up a big notch into kitchen sink-realness and honesty that wowed me.  One, with all due respect to their colleagues, said that many critics are skilled at watching movies but they're not too skilled at living life.

I thought that was brilliant.  And true.

They both stressed that the life experiences two of the filmmakers brought to the project, experiences that give the film depth, should be regarded more than they were by their colleagues.  The director is Fred Schepisi (pronouned Skep-see).  He directed Meryl Streep to an Oscar nomination for A Cry in the Dark.  That's the movie most folks have, in their minds, retitled A Dingo Ate My Baby.  He also directed Six Degrees of Separation.  This new film was written by Gerald Di Pego.

Their passion for the art made that film come alive for me.  I want to see it.  I've been around a lot of critics through the years, mostly in New York City, when I was an entertainment reporter.  I've read their reviews, sat with them at movie screenings, watched them on TV.  Not all, but some do seem to act as though they consider themselves to be celebrities on equal par with the stars on the screen.  And  there can be a sense of entitlement.  They usually don't pay to see new movies like we do.  In New York City, critics often see films for free with their colleagues.  Not with an audience of average moviegoers who paid for their tickets.  Sometimes you wonder if they ever spend time talking to average moviegoers of different races, ages and economic backgrounds.  Those conversations could inform their work.

In their reviews, you know that they're film intellectuals and have seen many domestic and foreign films.  But, in their writing, you don't get a sense that they've lived.  That they have a connection to the ordinary person.  That they have such a passion for the art of film that they'd do what they do if they had to pay for their movie admission before writing reviews and did not get reimbursed for it. Their writing is impressive, scholarly and witty .... but it lacks a soul.  With Roger Ebert, we felt a connection.  We knew that he was having a life -- especially after he was diagnosed with the ailment that, in time, took his physical life.  His spirit came through in his writing.  His work was a love story.  His life had a love story.  He was passionate about the art of film...and about life.

Last Friday, Henry Sheehan and Wade Major were wonderfully passionate about the art of director Fred Schepisi.  It was great to hear.