You may have read in one of my previous that the MGM movie musical remake of The Philadelphia Story became part of our Rivers Family history.  Many years ago, my first television appearance was on a syndicated game show.  The subject was film trivia.  The Movie Game was filmed at the old Goldwyn Studios in Hollywood.  I was the show's first African-American contestant, the youngest contestant at the time, and The Movie Game's first African-American winner.  I was in high school then and a total classic film geek.  I knew that High Society was Cole Porter's musical remake of The Philadelphia Story.  Knowing that "True Love" was the name of the boat in both versions helped me put a Kimball spinet piano in our South Los Angeles home that summer vacation. 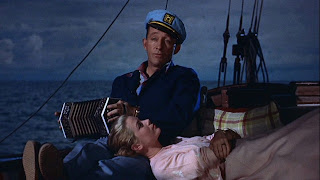 Bing Crosby and Grace Kelly took on the roles originated on film by Cary Grant and Katharine Hepburn. 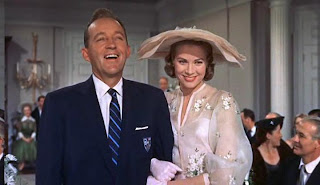 Frank Sinatra and Celeste Holm did the roles originally played on film by James Stewart and Ruth Hussey. 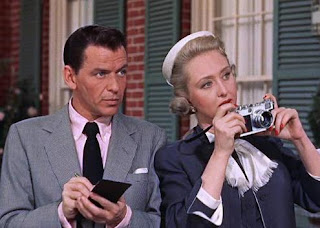 A new character was added.  Playing himself and bookending the movie in the open and at the end was the internationally acclaimed jazz artist, Louis Armstrong. 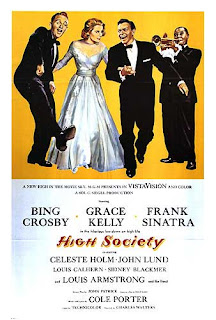 Here's Louis Armstrong with the soon-to-be Princess Grace of Monaco. 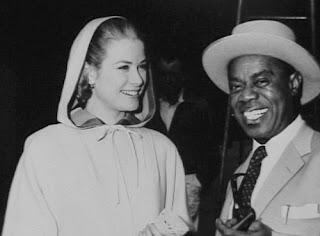 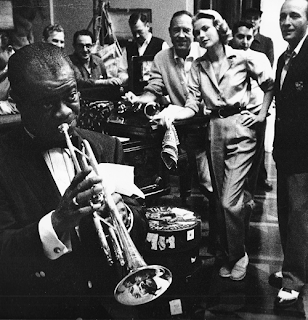 On Twitter, a Turner Classic Movies fan tweeted this while High Society was airing recently on TCM:  "The best part of High Society is Grace Kelly's wardrobe."  If I was a guest programmer on TCM with host, Robert Osborne, would I have said that? No.  If I was introducing High Society at a screening during the Turner Classic Movies Film Festival in Hollywood, would I have said that?  No.  Would I have tweeted that?  No.  But, in all fairness, I must add that I'm way older than the TCM fan who did tweet that and I've probably looked at more life through a civil rights era prism that he has.  He is a pretty nice guy.

Three people who were true legends in American music were musically in very fine form for this picture.  Those talents -- Bing Crosby, Frank Sinatra and Louis Armstrong.  They got some tasty original music to perform written by a superstar of Broadway and movie musicals, Cole Porter.  Maybe it's not a 4-star quality musical like Top Hat, Swing Time, The Wizard of Oz, Meet Me in St. Louis, The Band Wagon and West Side Story but I will sit there and swoon every single time I hear the elegant "I Love You, Samantha" sung by Crosby with silky trumpet accompaniment by Armstrong.  Man, that number is a beauty! 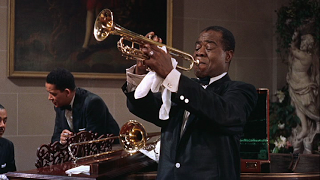 The "Now You Has Jazz" jam with Bing and Louie is a crowd-pleaser.  It bounces.  They'd do it again on a network TV special.  You can feel the fun they're having. Crosby probably wished they could've done more of that had Hollywood been more liberal. 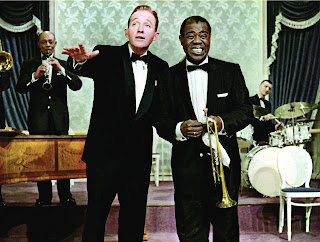 This movie came 20 years after Louis "Satchmo" Armstrong's first film appearance -- and that appearance was in an Oscar-nominated Bing Crosby musical.  Armstrong had a charisma and a natural acting talent.  However, Hollywood did not consistently give him upscale roles the way it gave sophisticated roles to Caucasian bandleaders such as Benny Goodman, Tommy Dorsey and Harry James.  High Society gave Louie Armstrong an upscale, sophisticated role.

These black men are music festival headliners.  They're wearing suits, not uniforms.  They're carrying their own bags.  They're not domestics carrying someone else's bags.  There was still work to be done in terms of racial equality and opportunities in Hollywood but this was a big step ahead.  Here are the two stars in 1936's Pennies from Heaven in which Crosby introduced the title tune.  It got an Oscar nominee for Best Song. 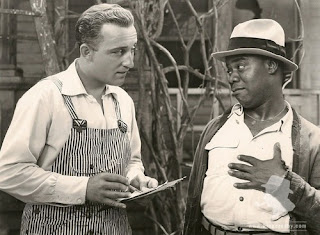 Crosby used his major star power at Paramount to get Armstrong hired for the movie and to get him star billing -- unheard of for black actors at that time.  The jazz musician followed this with one of the best specialty numbers in Paramount's Artists & Models (1937).  He and Martha Raye killed with the "Public Melody Number One" number. 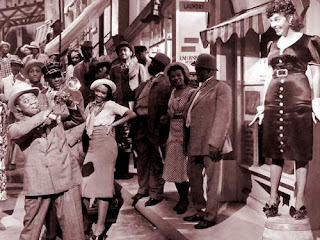 At Warner Bros., he did Going Places with Dick Powell and introduced the Best Song Oscar nominee, "Jeepers Creepers."  But he and the other black actors were in stereotypical servant roles.  For Vincente Minnelli at MGM, he played one of the funny devils in the musical folk tale, Cabin in the Sky, based on a Broadway success. 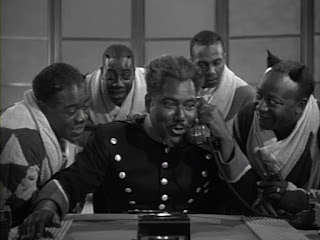 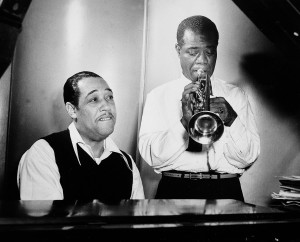 Armstrong (far left in top photo) and Duke Ellington (in photo under it with Armstrong) were both in this musical, the first film directed by Minnelli.  Armstrong and Ellington had minor roles in the movie but both were already established jazz stars in American and Europe.  Ken Burns expertly shows Louis Armstrong to be an American genius in his must-see Jazz documentary.  Jazz experts support Burns in this PBS production.  Although Armstrong was groundbreaking in the American art form called "jazz" and although he was celebrated here in America and revered in Europe, you'd never know it from the quality of most roles Hollywood gave him in the 1930s and '40s.  The best and most fitting role of Armstrong's film career came during the Civil Rights era of the 1960s.  He played a highly-respected jazz legend on tour in France in Martin Ritt's Paris Blues starring Paul Newman and Sidney Poitier.  "Satchmo" played "Wild Man" Moore. 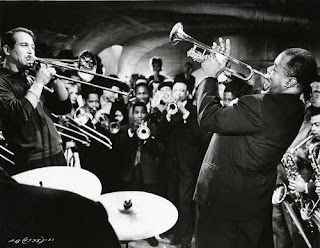 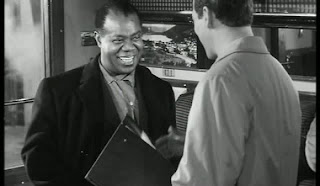 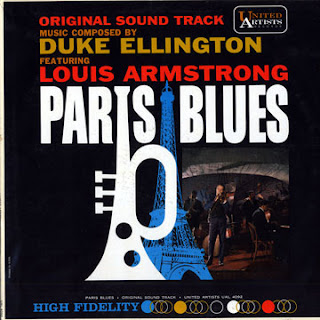 If you watch the Louis Armstrong chapters of Ken Burns' Jazz, the history will give you an appreciation for his part in MGM's High Society. 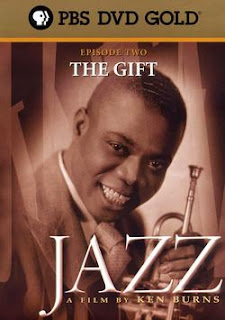 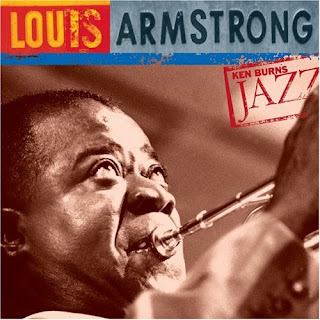 By the time Louis Armstrong and Bing Crosby teamed up again for MGM's High Society, they were veteran superstars with two of the most recognizable voices in show business.  But the closing credits irk me.  Look at them.  Louie Armstrong, American jazz genius and internationally famous entertainer, is billed below John Lund and Sidney Blackmer.  Not near Crosby, Sinatra and Grace Kelly.  I'm sorry.  That's just wrong. 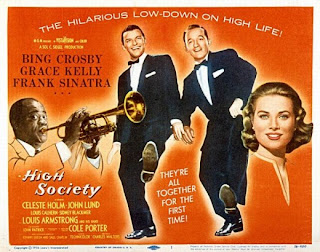 Watch Vincente Minnelli's 1943 musical, Cabin in the Sky before watching this 1956 Cole Porter musical directed by Charles Walters.  Minnelli guided Ethel Waters through a reprise of the lead role she originated in the hit Broadway musical version.  That was not the only Broadway hit on Ethel Waters' resume when she got to MGM.  Look at the extraordinary talent in the film -- Waters, Lena Horne, Louie Armstrong, Duke Ellington and dancer John Bubbles.   Their Hollywood opportunites for the rest of that decade were limited because of race.  Lena Horne's glamorous numbers at MGM were specialty numbers.  She was in the A-list of musical stars but did not get to act with the white fellow A-list MGM musical stars such as Judy Garland, Gene Kelly, Frank Sinatra, or Kathryn Grayson.  She was separated.  Gene Kelly, Vincente Minnelli and Judy Garland successfully fought to get The Nicholas Brothers in 1948's The Pirate.  Kelly said in one interview that the studio head didn't want a lot of black people in the film.  Vincente Minnelli's The Pirate is a musical comedy story that takes place in the Caribbean.  The Nicholas Brothers were brilliant in the "Be A Clown" number with Gene Kelly.  Broadway star Ethel Waters, also spotlighted in Ken Burns' Jazz, made history as the second black actor to get  an Oscar nomination.  Like Hattie McDaniel in Gone With The Wind, she played a maid.  Waters was a Best Supporting Actress Oscar nominee for Elia Kazan's race drama, Pinky.  The 1949 20th Century Fox release was her second film after 1943's Cabin in the Sky for MGM.  That Minnelli musical gave us a Best Song Oscar nominee.  Ethel Waters introduced "Happiness Is Just a Thing Called Joe."  Armstrong got another MGM assignment.  He and his band were featured in the Mickey Rooney drama called The Strip.  Armstrong plays at a nightclub on the Hollywood strip.  In that 1951 film, he introduced another tune that got a Best Song Oscar nomination -- "A Kiss To Build a Dream On."

Can you just imagine if racial diversity had been embraced by Hollywood's top studio for movie musicals, MGM, and if the studio had utilized the artistry of Armstrong, Ellington and Waters after Cabin in the Sky?  Can you imagine a number with "Satchmo" and Eleanor Powell?  Frank Sinatra and Duke Ellington?  Gene Kelly dancing to an original Ellington composition?  Lena Horne and Judy Garland doing a number together in Words and Music?  If only MGM had been brave enough to embrace racial diversity the way the Goldwyn Studios did in another musical remake that featured Louis Armstrong. That movie starred Danny Kaye and Virginia Mayo in A Song Is Born, a tuneful 1948 remake of the Barbara Stanwyck and Gary Cooper comedy, Ball of Fire.  The racial integration in the title number alone is what Lena Horne longed for at MGM.  That number has Danny Kaye, Virginia Mayo, Louie Armstrong, Benny Goodman and Lionel Hampton swingin' in the same scene.  I'm still ever so grateful to the Goldwyn Studios.

High Society -- Bing Crosby, Grace Kelly, Frank Sinatra and Celeste Holm.  Four Oscar-winning actors.  Louis Armstrong and two other male legends from the world of music.  New songs by Cole Porter.  I dig Sinatra's "Mind If I Make Love To You."  That vocal is like musical foreplay with a bottle of champagne. "True Love," sung by Crosby and Kelly, got an Oscar nomination for Best Song.  True, High Society is not up there with Singin' in the Rain, but it does have more going for it than just the lovely Grace Kelly costumes designed by Helen Rose.  There's some iconic American music talent, American racial history and social change to consider in this MGM feature.  Just my opinion. 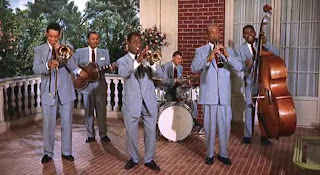