On ALWAYS BE MY MAYBE

Do you need some laughs? Are you up for a new romantic comedy that gives you something fresh? If you get Netflix, I've got the comedy for you. It's ALWAYS BE MY MAYBE directed by Ms. Nahnatchka Khan. This feature is a Netflix original. If it was in movie theaters, I would have paid to see it more than once. Not only that, I would've taken a friend to see it too. That's how much I enjoyed ALWAYS BE MY MAYBE. The two main stars, two writers and two producers are Ali Wong as Sasha Tran and Randall Park as Marcus Kim, natives of San Francisco. 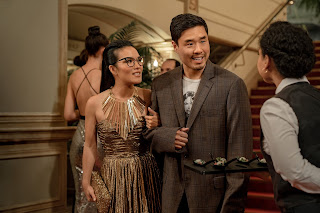 The movie starts with an appropriate hip-hop music beat and we're flashbacked to the Bay Area in the 1990s when Sasha and Marcus were kids. Kids who were next door neighbors. She's a girl fascinated with cooking. She spends a lot of time alone because her parents work. Sasha hangs out with lovably dorky Marcus next door. His sweet mom shows her how to make tasty Korean dishes. Sasha and Marcus are great buddies. As years go by, they become teen sweethearts. Their first sexual encounter, in a car, was so awkward it had me laughing out loud. More years go by and they're young adults in different cities. She's now a celebrity chef, popular with entertainment reporters at red carpet events. She has a hot, handsome celebrity boyfriend. Marcus helps his widower dad in his dad's air conditioner business. On the side, Marcus is in a band that does local gigs.

When Sasha and Marcus are reconnected in San Francisco, they're no longer sweethearts. But, as much as they try to ignore it, the spark reignites. 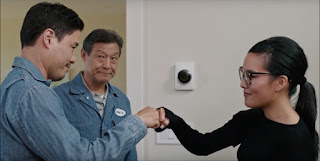 What's fresh about it? How often do we get a romantic comedy with two Asian-Americans in the lead roles? There were a couple of times when I hit the pause button, went back and played a scene again because it made me laugh so much. The double date at a posh restaurant scene is one example. I lived in San Francisco for a year. The whole Bay Area hipster vibe is nailed with a direct, accurate hit in that scene. Keanu Reeves shows up and does a bright, winning turns as a self-absorbed jerk of a movie star. Another scene that broke me up is the one in which Marcus goes to buy a designer suit. Randall Park and Ali Wong wrote some very funny comedy.

I saw comedian Michelle Buteau in a New York City comedy club about 10 years ago. She was terrific. She has since become a Class A supporting role friend or aide character in the great witty tradition of Eve Arden in classic 1940s films (COVER GIRL, MILDRED PIERCE, ONE TOUCH OF VENUS), Thelma Ritter in 1950s classics (ALL ABOUT EVE, REAR WINDOW, PILLOW TALK) down to Rosie O'Donnell in the 1990s (SLEEPLESS IN SEATTLE). Comedian/actress Michelle Buteau is a total joy as the very pregnant best friend and co-worker. Here's a trailer.

Ms. Khan directs this with a lively pace and gives us human, vulnerable sides of the characters. They're dimensional. Like director Nora Ephron (SLEEPLESS IN SEATTLE, YOU'VE GOT MAIL), Khan knows to keep a romantic comedy trim. Don't dawdle or get excessive. Keep it under 2 hours. This is something Judd Apatow productions need to learn. His rom-coms such as KNOCKED UP, TRAINWRECK and THE FIVE-YEAR ENGAGEMENT run a little over 2 hours but they'd be even better at 1 hour and 45 minutes. He lets guys ad lib scenes and the scenes go into the film even though they don't really move the action forward. I've seen the ad libbing in progress. I was a background actor in THE FIVE-YEAR ENGAGEMENT.

The incredibly handsome Daniel Dae Kim stars as Brandon. Has his name been tossed into the mix as a possible new James Bond? It should be. As for Randall Park, I've been a fan of his ever since 2011 when I lived in San Francisco. I noticed him in TV commercials. He's really good. Then in the winter of 2014, the satire THE INTERVIEW starring James Franco and Seth Rogen made TV news headlines. It poked fun at Kim Jong Un and, reportedly, North Korea was mad at us for that. ABC news covered the story several times and regularly mentioned that THE INTERVIEW starred James Franco and Seth Rogen. There was never any mention that Randall Park co-starred as the Korean dictator -- and stole the film with his wickedly funny performance. That was a major ABC news oversight because, in a few months, Randall Park would be seen as TV's newest sitcom dad when FRESH OFF THE BOAT premiered on ABC. It would make history as the first network sitcom in 20 years about an Asian-American family.

ALWAYS BE MY MAYBE made me happy. It's bright, light entertainment with a heart. It runs 1 hour and 42 minutes.
at August 15, 2019