The New York Film Festival is underway at Lincoln Center in New York City. This is like free tickets to and free rides in Disneyland for film critics who've been shut in and shut out of movie theaters due to the pandemic. On Friday morning, I read some of their Twitter post comments on THE TRAGEDY OF MACBETH, a fresh take on the Shakespeare drama, starring Denzel Washington and Frances McDormand in the lead roles. My first thought was "Wow! These reviews are going to generate major Oscar buzz." The black and white film adaptation was written and directed by Joel Coen, the husband of Oscar winner Frances McDormand.

I first looked for reviews from the critics of color who saw the film based on the famous Shakespeare tragedy: Kevin L. Lee of Film Inquiry tweeted "THE TRAGEDY OF MACBETH is a soaring epic...elevated by excellent performances. Absolutely see it on the big screen." Robert Daniels of the African American Film Critics Association tweeted "THE TRAGEDY OF MACBETH is definitely the bleakest adaptation of it. And I loved it. Denzel Washington and Frances McDormand gave me everything I wanted and more." Trey Mangum of Shadow and Act online wrote "Thrilling cinema that understands its purpose & accomplishes it ever so swiftly." Peter Bradshaw, an excellent Caucasian reviewer for Britain's The Guardian, gave THE TRAGEDY OF MACBETH five out of five stars. Another White critic, David Ehrlich of IndieWire, wrote "Denzel Washington delivers one of the best performances of his career in Joel Coen's THE TRAGEDY OF MACBETH, a film that points back to the glory days of film noir."  The wonderful Joanna Langfield of the Critics Choice Association tweeted "...McDormand, Denzel. A knockout." 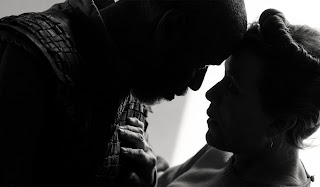 See what I mean? Here's a trailer for the film.

In Milwaukee, I was the first Black person to be seen as a weekly movie critic on the city's TV. I did that work for four years on the ABC affiliate and I also did print reviews. When Siskel & Ebert left PBS/Chicago to do their landmark film review show for Disney syndication, Chicago PBS contacted me to audition to be half of the new duo. In 1993 and 1994, I did a few film reviews on WNBC's local weekend live show in New York City. In 2000, after I pushed to be considered, I landed the weekly film critic spot on a live ABC News weekday afternoon magazine show called LIFETIME LIVE. The ABC News production aired on Lifetime TV and lasted nearly a year before its cancellation. I wrote "pushed to be considered" because initially ABC news producers questioned whether or not I had any knowledge of film and film history. They said that before looking at my demo reel. I loved that job and loved showing that Black people do have knowledge of new and classic films.

I watch ABC's GOOD MORNING AMERICA when the Oscar nominations are announced live from Los Angeles. In early 2017, when ABC News entertainment anchor Chris Connolly and Jess Cagle, veteran entertainment journalist now a PEOPLE Magazine editor discussed the nominees, they raved over Meryl Streep's umpteenth nomination. Neither Caucasian gentleman mentioned the Hollywood history Denzel Washington had just made with Oscar nominations for 2016's FENCES. The 2-time Oscar winner had just become the most Oscar-nominated Black actor in Hollywood history. FENCES, which he also directed, brought him his 7th Oscar nomination. He was nominated in the producer category thanks to the Oscar nomination for Best Picture that FENCES received. On Academy Awards night, Denzel had directed co-star Viola Davis to an Oscar victory for Best Supporting Actress.

That is why I push for critics of color to be included in the field of film reviews and film journalism, especially on network television. When Oscar nominations are announced next year, it looks as though Denzel Washington and Frances McDormand will get invites to Hollywood Prom Night again.

This archive reel of mine has a moment of me with Mr. Washington. The actor played a quadriplegic former homicide detective in 1999's THE BONE COLLECTOR. (The phone number you'll see is no longer in service.)