Singer, Actress, civil rights Activist. She was a Best Actress Tony nominee for the 1957 Broadway musical, JAMAICA. Her leading man, Ricardo Montalban, was nominated for Best Actor. This was after her 1940s years making musicals at MGM, the Tiffany's of Hollywood studios for A-list musicals. She was a groundbreaking and glamorous Black star in those deluxe musicals. However, her freedom was limited. She was showcased in a sophisticated number separate from the movie's actiom. She never was given the opportunity to do scenes and act with her white fellow stars of those classy musicals -- performers such as Frank Sinatra, Gene Kelly, Judy Garland and Fred Astaire. In the 1980s, she was the Toast of Broadway, receiving a Tony Award for her sensational one-woman show, LENA HORNE: THE LADY AND HER MUSIC. When she toured with that show in Milwaukee for a week, I saw the show more than once, attended the warm, friendly press reception Lena Horne held -- and Ms. Horne was extremely kind to my mother. 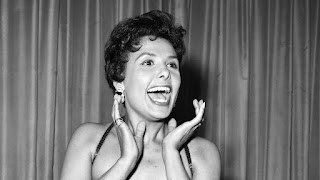 For your enjoyment, I've posted some Lena Horne vocals. First, is one I love from her years as a band singer before Hollywood called. The lovely song is "Out of Nowhere."

Here's Lena on an NBC music variety special in 1971 singing "Watch What Happens" from the French musical, THE UMBRELLAS OF CHERBOURG.

Lena Horne. She was absolutely fabulous.