A Date with SABRINA

One of the Best Actress Oscar nominations that the late, great Audrey Hepburn earned was for her luminous, intelligent, sophisticated work in Billy Wilder's SABRINA.  The movie opens like a modern day fairy tale with the words "Once upon a time."  Wilder's 1954 classic, a lemon peel twist on the Cinderella tale with a look at social class mobility and divisions in American, put Hepburn in a tough and highly exciting Oscar race.  The top two contenders were Judy Garland for her spectacular film comeback in the dramatic musical A STAR IS BORN and Grace Kelly for ditching glamour and dressing down in THE COUNTRY GIRL, a movie in which she played the drab, serious wife of a co-dependent alcoholic singer on the skids.  Garland was the favorite.  Kelly won the Oscar.  As for SABRINA, the role of the chauffeur's daughter who sees the playboy son of her father's boss as her Prince Charming, fit Audrey like a long velvet glove. 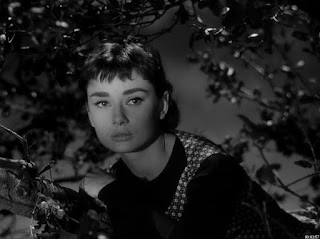 Sabrina's father knows that she pines for David, the handsome playboy son who lives leisurely in the Larrabee mansion, but the wise father realizes that David does not see Sabrina.  To him, she's invisible because she's the daughter of a member of the wealthy family's domestic staff.  As her chauffeur father tells her, "There's a front seat and a back seat -- and a window in between." 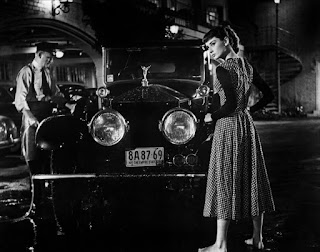 Sabrina will undergo an elegant emotional and fashion makeover when she leaves Long Island and studies in Paris.  She left home a caterpillar, she'll return as a butterfly. 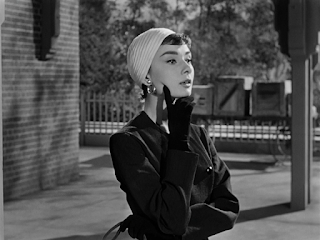 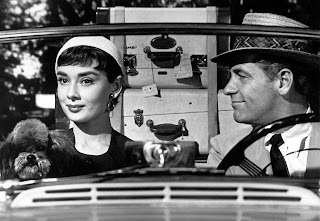 He will invite Sabrina to a party.  It happens to be on the Larrabee grounds.  The butterfly will be the belle of the ball.  David's fiancee will also be at the ball.  But David will make Sabrina's dream come true when he takes her in his arms and dances with her.  When he asks "Where have you been all my life?, she responds "Just over the garage." 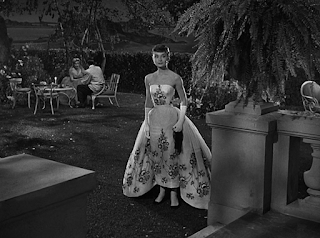 Sent to deal with all this and keep David from, yet again, breaking up with another woman...a woman's whose heartbreak will be mended with a sizable check...his older and more business-like brother Linus will enter Sabrina's scene.  Sabrina is not like David's other girls.  She could care less about his money.  William Holden played David.  Humphrey Bogart played Linus.  Sabrina will be a breath of fresh air in Linus' life -- and she will discover that a man does not have to be young and handsome to be a Prince Charming. 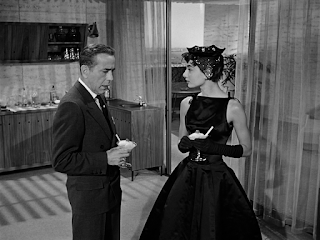 Linus' bachelor life is all about work.  But responsible, wealthy Linus embraces the working  class.  When he's in the limo on the phone making Wall Street investments that will increase the Larrabee fortune, notice that he keeps the window rolled down so that the family's longtime chauffeur, Sabrina's father, can overhear and get some stock tips.  Listen to Linus in the office.  He cares about who'll benefit from his deals.  He wants to know that he's done something that will help a poor kid in Puerto Rico.  Sabrina sees Linus' heart.  He noticed Sabrina before and after her Paris transformation.  She urges him to vacation in Paris and let it transform him too. 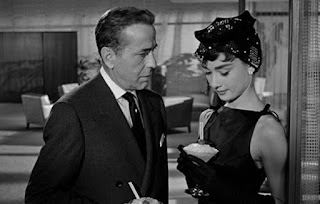 Years ago, I saw SABRINA at a revival theater in New York City.  A young woman sitting behind me snarked, "That would never happen."  She meant that a young, lovely lady like Sabrina Fairchild would never choose the older, average looking man over the handsome, hotter one.  Well, it happens more often than we think.  Here's an example that I love:  Actress Sophia Loren, a famous screen beauty, fell in love with Carlo Ponti. 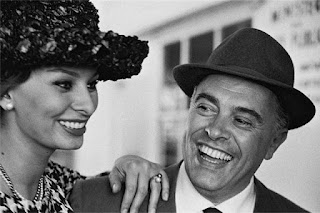 He was balding and not exactly a man one would call "a hunk."  But they married, they had two kids, and the marriage lasted until his death 40 years later. 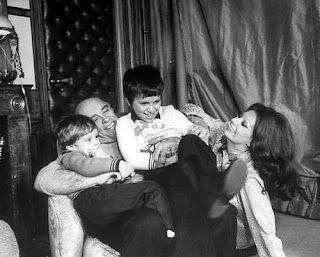 The late Carlo Ponti continues to be the great love of Sophia Loren's life. 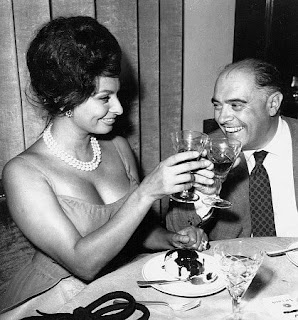 She turned down the chance to marry her two-time movie co-star Cary Grant and married Carlo Ponti instead.

Not that one needs to remake a Billy Wilder classic, as Sydney Pollack admitted on TCM when he was a guest host.  He remade SABRINA, a 1995 release starring Harrison Ford, Greg Kinnear and Julia Ormond.  But if there was another remake of the sparkling Billy Wilder classic, here's my idea for the lead actress to play the chauffeur's daughter:  Lupita Nyong'o. 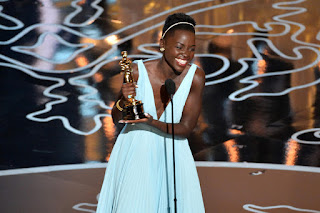 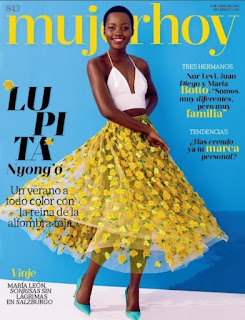 The Oscar winner and current Tony nominee could be fabulous in that romantic comedy role.

Audrey Hepburn was born this day in history, May 4th.