Carol Burnett at the Oscars

She gets a lifetime achievement honor during the Screen Actors Guild Awards tonight, January 30th. Carol Burnett certainly deserves it and not just for making us laugh every Saturday night for 11 years on CBS with her marvelous hour-long variety show.  On Broadway, on TV and on film, she has proven to be one of our most versatile entertainers.  She sings, she makes you laugh and she has strong dramatic skills.  Carol Burnett is so versatile and she's made hard work look like so much fun that her accomplishments outside of the TV box probably escaped some people.  I think one such person was film critic and published Hollywood historian Neal Gabler.  During a personal appearance, he pretty much told us folks in the audience that Carol Burnett had no right to be an Academy Awards presenter that month.  I felt...and still feel...that Carol Burnett had earned the right to be on that Oscars telecast. 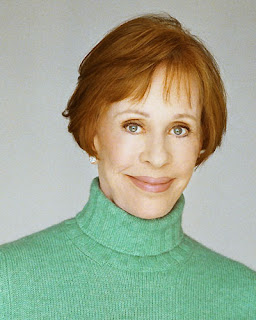 This happened in Milwaukee in the 1980s.  I was making a living at my first profession TV after graduating from college.  I was the weekly movie critic and a celebrity interviewer on Milwaukee's ABC affiliate.  Neal Gabler had a seat as one of the two new film critics on Sneak Previews after Siskel & Ebert left Chicago PBS for Disney syndication.  At the time, Neal Gabler may have been promoting one of his books while also promoting Sneak Previews.  The Oscars had recently been giving out and he got rather snarky about the fact that Carol Burnett presented the Oscar for Best Picture.  The winner for 1982 was Gandhi.  What he said and his attitude towards Ms. Burnett being a TV comic struck me as sexist and snobbish.  By then, she'd ended her successful long run on CBS.  The Carol Burnett Show ended in 1978.  One thing I can tell from my TV career is tht comedy is hard work.  Very hard work.  She made hard work not only look effortless on Saturday nights, she entered the weekly network variety show host game when it was mostly a boys' club.  Before TV, she'd hit big on Broadway in a musical comedy.  The fairy tale spoof was called Once Upon A Mattress.  On The Carol Burnett Show, there were the hysterically funny spoofs of classic movies like Sunset Boulevard starring Gloria Swanson as Norma Desmond... 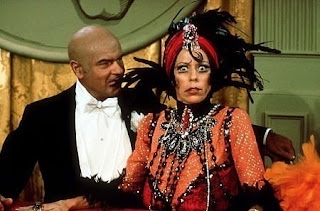 ...and probably her most beloved movie spoof of all, her Gone With The Wind take-off. 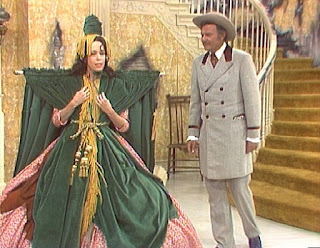 Remember when Vivien Leigh as Scarlett O'Hara in the famous 1939 film made a dress out of plantation window curtains? Burnett's version gave the show one of the longest laughs in the history of her show.  In her sketches as Eunice opposite Vicki Lawrence as the cranky old Mama, she'd played the flip side of serious family heartbreak and disappointment.  That was good character acting.

If Neal Gabler mentally reduced Carol Burnett to being "just" a TV comic who wasn't respectable enough to share a share with Hollywood movie stars, he was wrong.  Before that Oscars telecast, actress Carol Burnett was tapped to display her versatility in films directed by some of Hollywood's most acclaimed directors.  Her film credits include the touching comedy/drama Pete 'n' Tillie (1972) directed by Martin Ritt (Hud, Sounder, The Spy Who Came In From The Cold and Norma Rae).  In Pete 'n' Tillie, Burnett shares screen time with Walter Matthau and Geraldine Page.  She plays a middle-aged woman in San Francisco who meets a wisecracking guy.  They marry and have a child.  The child becomes critically ill.  Burnett is so good dramatically in this film.  Then she and Geraldine Page give you one of the funniest, messiest "girl fights" we've ever seen in Hollywood movie. 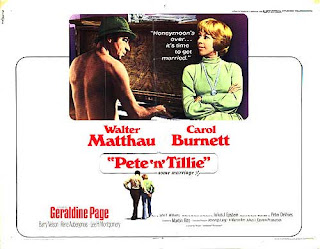 She's in Billy Wilder's 1974 remake of The Front Page starring Walter Matthau and Jack Lemmon, 1978's A Wedding directed by Robert Altman and she starred opposite Albert Finney in the 1982 movie version of the hit Broadway musical, Annie, directed by John Huston.

Carol Burnett has won Emmys, Golden Globes, the Presidential Medal of Freedom and the Mark Twain Award for American Comedy presented at the Kennedy Center.  I bet even Neal Gabler would be impressed by all that. 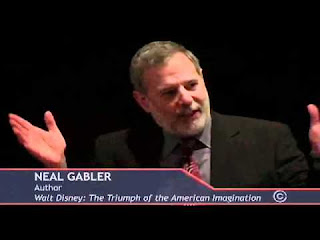