Fred MacMurray Gets a Bali High

Again I ask, "What the heck was in the Hollywood water of 1938 that made actors, writers and directors achieve maximum creativity while making films for release in 1939?  The number of truly good movies released in 1939 was so plentiful that it's still a legendary year in Hollywood history.  Back then, there were 10 nominees for Best Picture.  There could have been 20.  That's how good a year it was.  Even the "B" movies had "A" qualities about them.  I found an overlooked gem from 1939.  It's a romantic comedy from Paramount Pictures that stars Fred MacMurray.   He was a handsome, under-rated actor who made Hollywood acting look easy.  His "A" qualities are on display here. 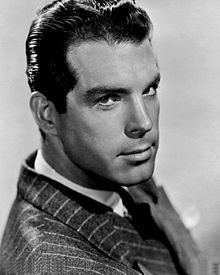 The comedy is one of those movies that fell into public domain -- like It's A Wonderful Life before baby boomer affection for the Capra holiday classic rescued it from limbo and enabled it to be restored, remastered and get annual network airings.  Apparently MacMurray's sweet comedy was originally titled Honeymoon in Bali.  MacMurray's co-star is Madeleine Carroll, the lovely British actress who was one of the first Hitchcock Blondes.  She starred in Hitchcock's 1935 thriller, The 39 Steps.
The couple does visit Bali but most of their story takes place in mid-town Manhattan.  Somewhere along the way, the movie title was changed to My Love For Yours. 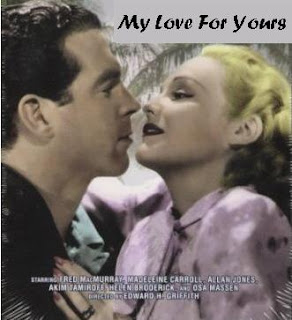 This is a pearly, polished comedy with a snappy pace and hip sophistication that makes it seem like one of better Mitchell Leisen comedies.  Only he didn't direct it.  Edward H. Griffith did.  The warm-hearted screenplay is by Virginia Van Upp.  If you're interested in "Women in Hollywood" history, she's someone to consider.  She was a veteran screenwriter.  She wrote one of Rita Hayworth's best musicals, Cover Girl, co-starring Gene Kelly.  Then she produced the noir classic, Gilda.  That film shot Rita Hayworth up to international Hollywood superstar status.  Virginia Van Upp did that at a time when very few women were getting producer credits.  In fact, she was one of the three.

Freddy Mac is one of those Hollywood veterans who worked for decades in the movies but never got an Oscar nomination.  His versatility seemed to be subliminal.  He could go from screwball comedies to being a cold-blooded killer -- most famously in Billy Wilder's Double Indemnity (1944).  He did war movies like The Caine Mutiny (1954), musical comedies (he had a fine singing voice that was put to good use in Sing You Sinners (1938) with Bing Crosby and the 1945 WWII time-travel satire  Where Do We Go From Here?), he could be a corporate heel and cheating husband  in Billy Wilder's The Apartment (Oscar winner, 1960 Best Picture) and then be the lovable, befuddled Disney lead/family man in comedies like The Shaggy Dog (1959), The Absent-Minded Professor  (1961) and Son of Flubber (1963).  He was a top TV dad on the long-running hit sitcom, My Three Sons (1960-1972).  From two heartless, horny characters in Billy Wilder classics to a sweet single parent in a classic sitcom -- not bad. 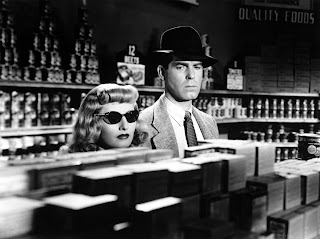 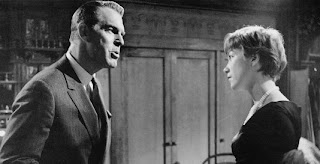 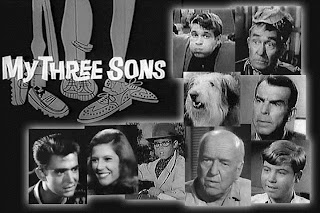 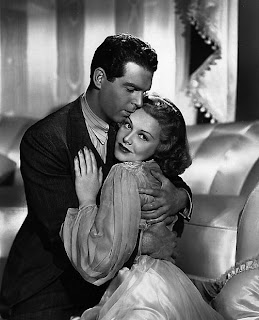 I found MY LOVE FOR YOURS (1939) on YouTube late last weekend night when I couldn't sleep.  I figured I'd watch about 10 or 20 minutes then go to bed.  I stayed up and watched the whole thing.  In fact, I watched it again before the weekend was over.  The movie was that charming, bright and well-played. I know it's an old movie.  However, as a film reviewer, I've had to endure new romantic comedies from Katharine Heigl, Kate Hudson and Jennifer Aniston.  Sitting through them was, indeed, work.  It's not  good sign when you're in a movie theater and, while the movie is playing, you wish you could press a fast-forward button to get to the end quicker.  This vintage valentine is a winner.

There's a "meet-cute."  She's, Gail, an executive at a swanky Manhattan department store called Morrissey's.  He's Bill, a sharp and smart big city bachelor who lives most of the year in Bali.  He's crazy about the place.  They meet on a boat.  Indoors.  In a store.  Gail's determined to stay an independent career woman.  She says, "I'm not a feminist, but the expression 'It's a man's world' always irritates me."  She's not in the mood for love, she thinks.  Gail also says "...love muddles you up...It throws you."  Bill likes being a free spirit.  And he's a kind man.  He's a bachelor with a kid.  His best friend is a widower, a single parent, a war vet and terminally ill.  Bill has committed to caring for his little girl.  Gail may have a fancy office and a top job but she's never lost a working class sensibility.  She treats the window washer with the same respect she'd give to a fellow executive.  We like Gail.  We like Bill. They have substance.  They're not just two privileged and pretty people who fall in love as if love is the birthright of the gorgeous. 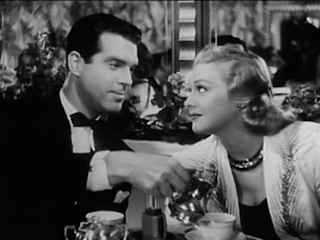 If you're a writer and/or actor, notice the opening scene with the burly and wise window washer played by Akim Tamiroff. There's no sense of higher position, in the executive sense, towards him.  She never pulls rank on him.  He notices her lovely legs while he's washing her windows in a rain storm.  She tells him to come into her office and get out of the rain.  He's doing his maintenance duty because it's company routine.  She makes a call and reminds his supervisor that routine must never come before common sense.  In her office, there's democracy -- like sitting in a Manhattan subway car. She and the window washer chat about store product.   He comments on a dress and her shoes.  Gail, the executive, considers his input. They become work buddies.  If you were a young actress and were given that scene in sides (the script) to look over before the audition, that gives you information as to how to play Gail.  She's democratic.  Approachable.  Concerned about others.  Serious about her work.  A smart businesswoman.  The clues are all there in that light banter when you break down the script. 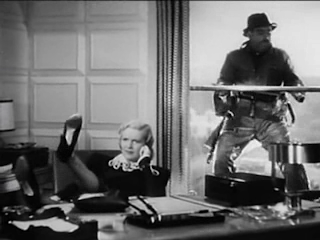 Leading ladies in romantic comedies always have a trusty, less attractive gal pal.  Gail's is played by Helen Broderick, the mature actress who played gal pal to Ginger Rogers in Top Hat and Swing Time.  All the actors, the leads and supporting players, are on the same page.  They know what the scene needs and how to move it along.  One key scene is wonderfully played by a supporting actress also known from an Astaire and Rogers RKO musical.  Astrid Allwyn was in Follow the Fleet.  She plays the fortune teller, a tarot card reader in a posh restaurant.  She gives that small part such a nice champagne flavor.  It's a nice scene with the three women.  Allwyn shows you how to make a bit part stand out.  It's smooth work.  She's only in the film for about five minutes giving that beauty of a performance.  The readings, of course, are for the amusement of the ladies who lunch.  But the psychic predictions for Gail start coming true immediately.  The first one comes true in the handsome form of Bill in a boat shop.

That first scene with Fred MacMurray also works.  The way they toss the light romantic comedy dialogue back and forth, with such wit and flair, makes you say "THAT'S the way it supposed to be done!" in comparison to some rom-coms made today.

What also makes My Love For Yours a real treat is Carolyn Lee as Rosie.  She didn't become a famous child star like Shirley Temple or Margaret O'Brien.  Yet she could steal a film and steal your heart.  She's an unaffected, regular, polite little girl.  And adorable.  The three are terrific together.  You want them to become a family. 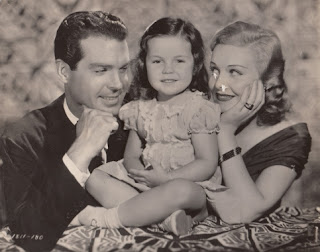 The movie is confident enough to inject a serious moment or two into the story.  That gives it a nice depth.  One scene that I loved -- Gail telling Rosie why we pray and to whom we pray.  And how we pray.  It's very delicate scene that shows us the career woman's spiritual quality.  She teaches the little girl about The Lord.  "...He's all around you," Gail says.  She doesn't tell Rosie to pray for material goods and privileges.  She tells her that prayers are for "...protection and love." 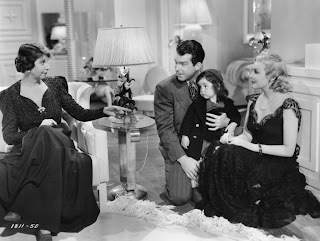 Gail's got a gentleman that she dates in Manhattan.  Bill's being chased by a shallow hot babe who seems to have very active hormones.  She's a young widow.  Her husband died and left her lots of money.  She doesn't miss him.  She wants to marry Bill.  With her on the scene, you wonder if the tarot card predictions for Gail can come true.

Trust me.  This is a fun movie.  If you're a classic film fan, look for it online.  I predict you'll be entertained.  My Love For Yours also known as Honeymoon in Bali should be delivered from public domain limbo.  Comedy is hard work.  Fred MacMurray made it all look so easy -- for such a long time.