Would You Dump Trump?

Last night, I think I fell in love with NBC news anchor Brian Williams when he verbally snatched those remnants of hair off the scalp of Donald Trump during election night coverage.  Williams said that Trump "has driven well past the last exit to relevance." 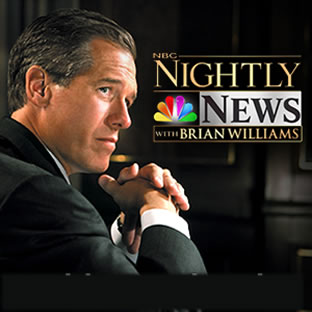 Oh, so many of us could not agree more.  Even Barbara Walters on ABC's The View pleaded with her millionaire buddy to stop with the ignorant comments about and attacks on President Obama.  Both Brian Williams and Donald Trump get color TV airtime thanks to the peacock.  Williams anchors the NBC Nightly News.  Trump hosts the prime time reality game show, The Apprentice, and its popular celebrity spin-off on NBC. 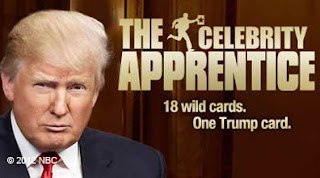 I call it a game show because, let's face it.  The people on it are contestants vying for a title, a prize.  Trump took to Twitter again for more anti-Obama messages after the president's re-election.  He tweeted, "We should march on Washington and stop this travesty" and "This election is a total sham and a travesty.  We are not a democracy."  When Brian Williams called this action "irresponsible," I'd have sent him a gourmet muffin gift basket if I was employed and had a steady income.  With all that said, here's a question:  Should NBC keep Donald Trump on its prime time programming slate?  Even though I could totally use the broadcast exposure and the money, if I was tapped to be on The Celebrity Apprentice, I'd turn it down in a heartbeat.  I wouldn't want to be seen with a man who has repeatedly disrespected our president and our democratic system to such an extent.  I'm too angry about that.  Let's go back a few years.  If a young minority comedian/actor hosted a prime time NBC reality game show -- someone like a Kevin Hart -- and he repeatedly wrote or said such extreme things about President George W. Bush when he was re-elected, would that comedian/host still have had a job? 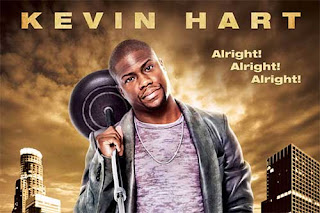 If a black or Latino NBC prime time entertainment host had tweeted, "W stole another election," could he...or she...prepare for a new season of host work on The Peacock Network?  Keep in mind that NBC News hired two members of the Bush Family.  Morning radio DJ Billy Bush made his TV debut as a lifestyle features reporter for WNBC.  Four months later, he went network as a Today contributor.  He's now the face of Access Hollywood.  Jenna Bush Hager also became a contributor for NBC's Today show.  I didn't vote for George W. Bush.  Would I have publicly said irresponsible things about him while holding down a network gig?  No.  Absolutely not.  If he walked into the studio while I was working, what would I do?  Stand up and politely greet him -- out of respect for the office he held.  Billy Bush and I are veterans of local WNBC News.  I was assigned a steady diet of "wacky" local live remote segments for two years.  The kind that sapped Jim Carrey's local TV reporter of all creative energy in the first 20 minutes of Bruce Almighty.  I made a wisecrack during a circus remote.  No one complained about it.  Not one viewer call.  Not one letter.  (This was before email.)  But news management made me apologize on air for it.  Why?  Because the WNBC news director felt my wisecrack would have offended his mother -- had she been watching. And he threatened to fire me.  I kid you not.

So...should NBC dump Donald Trump from its prime time line-up due to his repeated public disrespect for the President of the United States?  Feel free to leave comments.

By the way, here's the wisecrack that got me in trouble back in 1994:  I was assigned to do live segment with a traveling circus company up from Florida and playing a weekend in the New York area.  One of its advertised star attractions was "Uncle Grumpy and his Singing Pig."  I had to interview Uncle Grumpy and then get him to make the pig sing on our weekend morning show.  Uncle Grumpy did not want to give his real name.  The circus name suited him.  He looked like a biker gang member on Sons of Anarchy.  The pig was the size of a zipcar. When I asked Grumpy to make the pig sing for us, he whipped a big wooden stick out of his overalls and proceeded to whack the pig on the ass like it was a convict.  I didn't expect that.  Neither did the cameraman.  The pig broke out into some high-pitched squealing.  Our co-host back in the studio said something like "Bobby, is that how the pig sings?"  I replied, "I think so.  But it sounds more like Ned Beatty in Deliverance."  For that, I was called into the news director's office.