"Wouldn't that be wonderful." ~Whoopi Goldberg

I whole-heartedly agreed with Whoopi Goldberg the early morning I told her about the Andy Griffith performance I'd seen the night before at a New York City preview screening of Waitress, written and directed by the late Adrienne Shelly.  I reviewed the movie on Whoopi's syndicated radio morning radio show.  Before we went on the air, I told her I hoped the movie would bring Andy Griffith an Oscar nomination for Best Supporting Actor.  The above quote was her immediate reaction.  As the dapper, somewhat mysterious character called Old Joe, he's as crusty as the pies that make the lead female character so popular in a small town Southern diner. 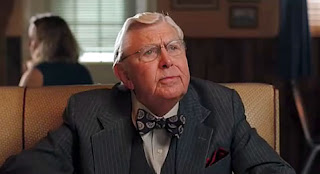 This indie comedy about the sweet and sour in Americana was one of my favorite films of 2007.  It's a beauty of a movie and Griffith's performance adds to its wonderfulness.  He's not Matlock here.  He's not Sheriff Andy Taylor from TV's classic The Andy Griffith Show.  Old Joe in Waitress reminded us of Griffith's versatile gifts as an actor. 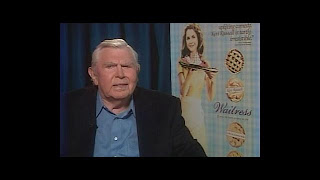 One of our radio show co-workers in the room only new Griffith from his famed CBS sitcom.  Whoopi and I quickly brought up and recommended his searing dramatic performance in Elia Kazan's A Face in the Crowd.  In an earlier post, I blogged about actors who were "Overlooked by Oscars" -- never nominated after decades of memorable work.  This was inspired by a remark Whoopi made at work one morning.  When actors say "It's an honor just to be nominated," that's serious.  When young entertainment reporters comment that a star "has only one Oscar," that's a lame thing to say.  Some veteran acclaimed actors were never even nominated.  Like the first actor I mentioned, Edward G. Robinson.  Now I want to add the late Andy Griffith to my list.  His blistering and brilliant work as media monster Larry "Lonesome" Rhodes in A Face in the Crowd is one of the best performances of the 1950s by an actor in a Hollywood film.  Andy Griffith burns up the screen in that role, a role that still has relevance today. 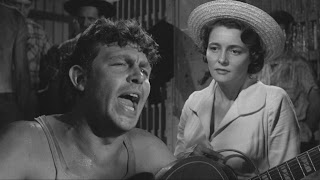 Discovered by a lifestyles reporter for a radio show (played by Patricia Neal), he's a boozin', brawlin' good ol' boy drifter whose got a personality that instantly clicks with listeners and, later, television viewers.  There are warts behind his homespun, friendly public image. 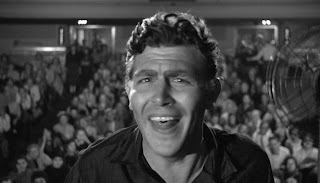 If you only know Griffith from his TV shows, you must see this film.  The same kind of raves attached to Marlon Brando as Stanley Kowalski in the Broadway and film versions of A Streetcar Named Desire apply to Griffith here.  His work is raw, primal, sexual, intense, brutal and unrestrained.  You just know "Lonesome" Rhodes is like a wild stallion in the sack.  He's magnetic.  You feel the pull he has on people.  You feel his power to pervert that pull as his TV fame escalates like an undeclared war.  He manipulates the medium of TV for financial gain and dark political influence as he warns "I'm not just an entertainer.  I'm an influence, a wielder of opinion, a force.  A force!" 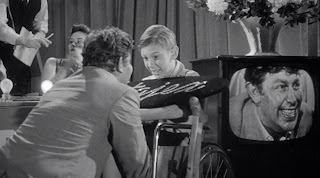 He's a user.  Yet Griffith gives you glimpses into the desperate loneliness Rhodes tries to cover up with his aggressive abuse of power.  You see that media monsters are not born.  They're made.  And, perhaps, we help make those monsters at a cost to our freedoms and democracy.  This film was made after Griffith's Broadway debut, in a military comedy, and three years before the premiere of his CBS sitcom with Don Knotts and little Ron Howard.  Hard to believe today that his blazing A Face in the Crowd performance did not put him in the Oscar race for Best Actor of 1957.  Marlon Brando was up for Sayonara.  Alec Guinness won for The Bridge on the River Kwai.  Two-time Oscar winner Anthony Quinn was nominated for Wild Is The Wind.  I saw Quinn as the Italian widower who flies back to the Old Country and returns to his farm with a new bride -- his late wife's sister, played by Anna Magnani.  Quinn's good but, unlike Magnani and co-star Anthony Franciosa, he overbakes it sometimes.  You catch him acting.  Andy Griffith becomes "Lonesome" Rhodes.  His portrayal gets a grip on your neck and drags you to the dark side for a while.  A Face in the Crowd co-stars Patricia Neal, Walter Matthau (both in pic below), Lee Remick, Kay Medford and Anthony Franciosa were all Oscar nominees for other film work.  Franciosa was a Best Actor Oscar nominee for 1957's A Hatful of Rain. 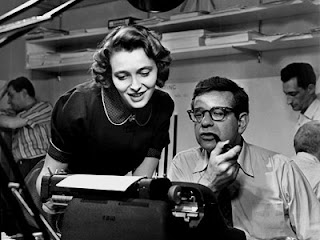 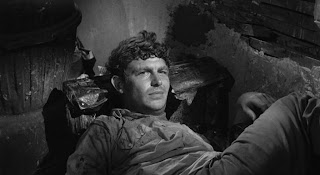 This is the classic film and character regularly referenced by Keith Olbermann when he was on MSNBC and verbally slapped national TV/radio show host Glenn Beck.  Did you know Whoopi Goldberg was considered to star in a possible late 1980s/early 1990s remake of A Face in the Crowd?This movie aired frequently on local KHJ TV/Ch. 9 in Los Angeles when I was a kid.  That's when I discovered there was so much more to Andy Griffith's talent than his Mayberry adventures I enjoyed so much on CBS.  Kazan's film made me think about the power of television and our responsibility as Americans when faced with corruption.  To this day, I'm surprised that more of Griffith's TV fans aren't aware of this picture.  His work in Kazan's film is powerful and unforgettable.  It's a disturbing knockout.  That same channel (now called KCAL 9) aired his performance as the hillbilly whose brains and brawn baffle and amaze his Air Force officers in the World War II comedy, No Time for Sergeants.  Griffith recreated one of his Tony-nominated Broadway roles here.  My Army veteran dad loved that 1958 comedy movie.  Griffith's other Tony nod came for taking on one of James Stewart's top 1939 roles when he played the lawman in a musical version of Destry Rides Again. I loved Andy Griffith as a cowboy actor in the 1975 Hollywood-on-Hollywood comedy, Hearts of the West.  In the early days of talking movies, he's a veteran who knows better than to volunteer for no-pay stunt work.  He teaches this to the clueless young Hollywood hopeful Jeff Bridges plays.  A free stunt he performs with a horse has him moaning in a state of testicular distress.  Griffith's wise mature cowboy tends to the pained young one and says, "You never do it for nothin'.  You'll ruin the business."  Broadway, film, television -- what a talent Andy Griffith was.  Here's some trivia about Waitress:  Three of the movie's cast members are now ABC TV stars.  Nathan Fillion solves murders as TV's Castle.  Cheryl Hines and Jeremy Sisto get laughs in Suburgatory.

To give you an idea of the quality of films Hollywood gave us in 1957 versus today, here are some of that year's releases:  A Face in the Crowd, 12 Angry Men, Sweet Smell of Success, Paths of Glory, Funny Face, The Pajama Game, An Affair to Remember, Wild Is The Wind, A Hatful of Rain, Peyton Place, Sayonara, The Prince and the Showgirl with Marilyn Monroe and Laurence Olivier,  Elvis Presley in Jailhouse Rock, Billy Wilder's Witness for the Prosecution and Love in the Afternoon, Disney's Old Yeller, 3:10 to Yuma and The Bridge of the River Kwai.  Ingmar Bergman gave us the subtitled Swedish film, The Seventh Seal.  From Italy, Fellini graced us with Nights of Cabiria. 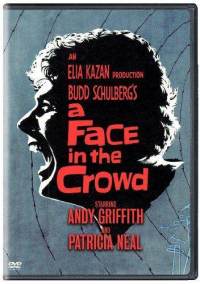 Kazan's A Face in the Crowd is a Warner Brothers DVD release.  You'll see what I mean about Andy Griffith's brilliance.