If this movie aired tonight on network TV, it should have an announcer say "Brought you to by...Ashley Madison."  A family man books an "appointment" with a woman from an escort agency he found online and, as you'd expect, his life becomes a mess afterwards.  The prostitutes at that agency are like cocktail lounge salted peanuts.  He can't stop after having just one.  But Sam Ellis is no ordinary married man.  He's a federal prosecutor.  A no-nonsense, respectable public servant who's expected to run for Attorney General.  The next thing you know, he's so strung out on expensive poontang that it makes him climb into a dumpster.  The plot of a family man having a risky affair is nothing new.  I probably would've skipped this indie film until I saw that it stars handsome actor/singer Patrick Wilson.  He's a pro at playing guys in surreptitious sexual situations.  Look at him in Angels in America, Hard Candy with Ellen Page and Little Children with Kate Winslet.  He continues that pro streak as the attorney with zipper problems.  Sam's known as a straight arrow who takes down the over-privileged and morally corrupt. 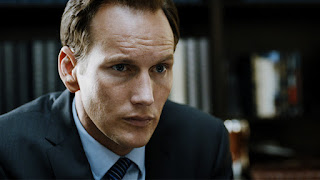 Sam is married to a charming brunette.  They have a lovely home and sweet little boy. 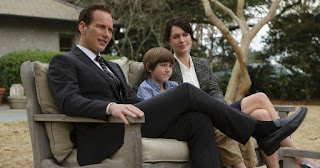 But Sam Ellis seems to have a blonde obsession.  A young blonde colleague comes onto him one night outside a bar and goes after his lips like they're a Big Mac. 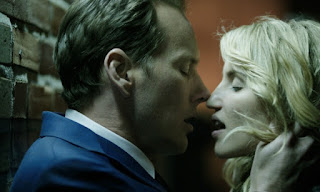 Then he goes home and masturbates to hot blondes he sees on porn sites.  He contacts an online escort agency called Executive Privilege and books one hour with a hot blonde he sees in a photo on the agency's website.  However, when he arrives for his appointment, he discovers that she's changed her hair color.  She's now brunette.  Just like his wife.  He burns through his bank account for secret sex with other blondes from that escort agency.  You get the tense feeling that this is not going to end well.  At some point, he'll be faced with how to get rid of a dead hooker's body.  He feels guilty and conflicted.  The acting is good.  The movie satisfies visually.  (For Wilson fans, you do get a shot of his bare butt.)  However, I didn't understand Sam's sudden need for the outside sex with blondes.  He went from "boy scout," as his boss calls him, to major horndog who lies to his wife.

That escort agency has his hormones spinning like they're in those giant teacups at Disneyland.  In this movie, the wife isn't pleasantly bland like beige curtains.  She's a babe!  She's interesting, sophisticated, warm and quite willing to keep the sexual fires aflame in their marriage.  His wife is sexy.  They've been married 13 years and they married young.  With a hot wife, why did he need to rent blonde hookers?

Why jeopardize his chance to become Attorney General?  The man who sees issues in black and white learns the hard way that issues can also be as his boss sees them -- "gray, murky."  Here's a trailer.
I felt that if Sam was a closeted gay man fulfilling his long-denied true sexual desires with men from a gay male escort agency, that would make more sense.  It would've been a bolder script choice.  I knew a guy who was a family man and felt guilty for having a boyfriend on the side.  He'd married young and did so because he felt the pressures of family, society and religion to marry a woman and produce children.

My misgivings about Sam's female hooker hunger all quickly melted in the dramatic heat of the last 20 minutes.  I won't tell you what happens.  But I will tell you that if you're up for some weekend movie entertainment, something driven by characters and dialogue instead of fantasy special effects and action scenes, Zipper will not disappoint.

Mora Stephens has some juicy stuff in Zipper.  She directed and co-wrote the film.  Under her direction, roles you've seen before get a new life and a fresh approach here.  I absolutely loved Lena Headey as Sam's wife.  She's a best friend who will not tolerate being treated badly and her legal brain can match his.  She's not just a housewife and cheerleader for her husband's career.  The hookers don't come off as one-dimensional.  Notice Sam's first encounter.  She's like a well-dressed businesswoman successfully making a sale.  She pushes the product and when she meets with a little resistance, she locates a vulnerable spot in the client, pitches a new angle and closes the deal.  And she doesn't handle the cash.  The clients leave a "donation."  In her job, she's as focused as he is in his.  Patrick Wilson is solid as a man who is excited, humiliated and disgraced by his penis' walk on the wild side.  Sam gets a medical check-up that's revealing yet turns out to be unnecessary.  Director Mora Stephens could've ended that scene with a sad trombone sound:  "Wah-wah...waaah."

Sam feels blocked in by society's expectations of its public servants.  Ray Winstone plays a tough national journalist curious about Sam's political ambitions.  Richard Dreyfuss appears as the Washington insider who shows that there's occasionally a very fine line between prostitution and politics.  Zipper is rated R for sexual content and language.  It runs about 1 hour 40 minutes.  For some good and sexy weekend entertainment, check to see if Patrick Wilson's Zipper opened near you on Aug. 28th.